Last week I engaged in vigilante book re-categorization at Chapters-Indigo. I moved Stephen Meyer’s book from the Science section to the Religion section. I had written Chapters-Indigo last year (more on this below) and they had agreed to re-categorize the book, so I wasn’t sure what happened at this store and I was too tired for a long discussion with staff so I just re-categorized it myself. Looking at the categorization online, it seems to have been placed back in Science and Nature so I will need to re-engage to find out why it was moved back.

For those who don’t know who Stephen Meyer is, he is a member of the Discovery Institute, a public policy think tank based in Seattle, Washington that advocates for Intelligent Design and its teaching in public high school science courses as an accepted scientific theory (which it is not). The Discovery Institute has helped promote the false perception that scientists are deeply divided over the theory of evolution (they aren’t). They also authored The Wedge Strategy which has the goal (from Wikipedia):

To defeat materialism, naturalism, evolution, and “reverse the stifling materialist world view and replace it with a science consonant with Christian and theistic convictions.” 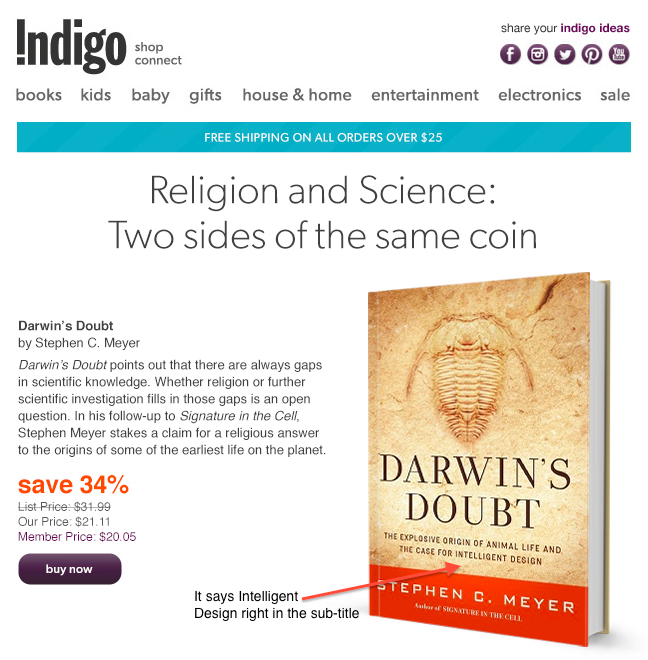 Intelligent Design Is Religion not Science and they aren’t Two Sides of the Same Coin!

Stephen Meyer wrote a book called Darwin’s Doubt: The Explosive Origin of Animal Life and the Case for Intelligent Design which attempts to show that an intelligent designer caused the rapid appearance (BTW, rapid in this case is far from short, it took 10-30 million years) of animal phyla over 500 million years ago during the Cambrian period.

Meyers is not a biologist or palaeontologist and both (Don Prothero and Nick Matzke) have thoroughly trashed his book. A notable review comes from a famous paleobiologist (Charles R. Marshall)  in a scientific, peer reviewed journal, Science. This review, like the others, points out Meyer’s poor, highly selective scholarship:

As Meyer points out, he is not a biologist; so perhaps he could be excused for basing his scientific arguments on an outdated understanding of morphogenesis. But my disappointment runs deeper than that. It stems from Meyer’s systematic failure of scholarship. For instance, while I was flattered to find him quote one of my own review papers —although the quote is actually a chimera drawn from two very different parts of my review—he fails to even mention the review’s (and many other papers’) central point: that new genes did not drive the Cambrian explosion. His scholarship, where it matters most, is highly selective.

So, it is clear this is a book based on religion. It sets out to bend facts so that they fit an a priori (that God did it), and it therefore belongs in the Religion section. I wrote the following to Chapters Indigo back in July:

It is important that you realize that these books are not expressing “two sides of the same coin”. Dawkins’s book elucidates facts about science; Meyer’s book promotes religious Creationism in the form of Intelligent Design (it says so in the sub title on the front cover).

Since Intelligent Design is not science (as ruled in the 2005 Kitzmiller v. Dover Area School District trial by U.S. District Judge John E. Jones III when he said that intelligent design is not science and that it “cannot uncouple itself from its creationist, and thus religious, antecedents”), this book should not appear in the Science section but should be moved to the religion section.

Keeping Meyer’s book in the science section does a disservice to your readers who could be confused by the content.

Chapters Indigo apologized for the mix up and quickly moved the book. I and others checked for a while and it seemed to hold steady in the Religion section. However, as I mentioned above, I found it both in store and online filed in the Science section.

I hate this sort of deception. Someone wanting to know more about Evolution and/or the Cambrian Explosion will be deceived into thinking this is real science because it sits right there next to Jerry Coyne’s book, Why Evolution is True and Richard Dawkins’s book, The Greatest Show on Earth – both excellent and factual books about evolution that everyone should read!

I plan to start emailing Chapters Indigo again. I hope you will too!