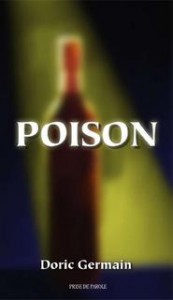 Christopher Karas a student at École Secondaire Catholique Sainte-Famille in Mississauga knows just how poisonous Catholic Schools can be.

According to a Toronto Star article,

Christopher Karas, a Grade 12 student at École Secondaire Catholique Sainte-Famille, claims he has been repeatedly belittled by teachers and administration for being gay.

Karas’ complaints about his treatment and the teaching against homosexuality were undermined throughout his time at L’École secondaire catholique Sainte-Famille.  Karas will graduate in spring 2014 and get away from this poisonous atmosphere; however, because Karas is committed to  “creating a safe space at school for everyone,” he decided to file a complaint to the Human Rights Tribunal of Ontario.

Doric Germain’s novel Poison is required reading for grade 12 students at Karas’ school. The plot of Poison would be horrifying to any sensitive student, gay or straight.

According to The Star,  Poison

tells the tale of a family torn apart by alcoholism. In one passage, a father comes home drunk to find his son Patrick “pants down with another boy.”

The father lashes out and says, “I will not tolerate a f—-t in my house.”

He then beats Patrick in a fit of rage, and “therefore transformed the f—-t into a cripple,” the book says. The boy eventually devolves into a lifestyle of drugs.

When Karas complained to the vice-principal, she refused to remove the book from the curriculum because “the school does not censor books.”

Does she mean L’École secondaire catholique Sainte-Famille doesn’t censor books, or Catholic schools don’t censor books?  She must be defending her own school because Ontario Catholic schools have censored/banned books. In one high-profile case the Halton District Catholic School Board removed atheist Philip Pullman’s His Dark Materials trilogy: The Golden Compass, The Subtle Knife and The Amber Spyglass.

The high school years can be a difficult time for students; they can be particularly difficult for students in Catholic high schools where students are expected to ignore and repress their sexuality.  When you are a gay student like Karas, your sexuality is also attacked by systemic homophobia.