On Saturday, sometime before 11 PM, someone set fire to the only mosque in Peterborough. 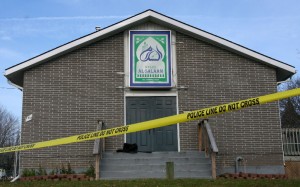 Masjid al-Salaam. There is little visible exterior damage, but heavy smoke damage inside.

No one was hurt, thankfully, and while the damage was considerable inside, the Masjid Al-Salaam building itself survived. A neighbour noticed the flames and alerted fire services, who managed to quickly confine the flames to the main floor. In the end, the damage done was estimated at $80,000.

Kenzu Abella, president of the Kawartha Muslim Religious Association, noted that only a half-hour before the fire was set, nearly 70 people were inside celebrating the birth of a young couple’s baby, including many with very young children. The mosque has 200 members, many of whom come for the five-times daily prayers and a congregational prayer every Friday, and during the day runs a school. That the fire was set when the mosque was empty was lucky; had it been set during the earlier gathering, or during school hours, there could have been serious injuries.

The police have confirmed that the fire was deliberately set, and are investigating it as a hate crime.

Until the damage is repaired, the school and daily prayers have been cancelled. Members are apparently quite understandably upset by the attack. According to Abella, the mosque had never been threatened, and had always had a good relationship with the community. He did make the obvious connection that the attack may be some kind of demented “retaliation” inspired by the Paris attacks, but his primary concern is for the safety of the mosque’s members: It’s horrible, it’s very upsetting. It’s a big concern. You are safe one moment and then all of a sudden you have to worry about what’s going to happen.

At this point, I would love to be able to say that Peterborough’s atheist and freethinker community quickly stepped up to denounce the attacks, offered support, and started a collection to help pay for the damages. Unfortunately, I can say none of those things.

It seems they decided their efforts were better spent translating a nonsensical tirade about niqabs.

Instead, it was the St. John’s Anglican Church who stepped up, and organized a collection to help the KMRA pay for repairs. A Facebook group has been set up, and a crowdfunding campaign raised over $110,000 in less than 2 days before being asked to stop, because the mosque did not want any more raised than was necessary to pay for damages.

There have been suggestions, though, that fund-raising should continue, and the extra funds used to pay for another act of vandalism against another gathering place of an entirely different religion. 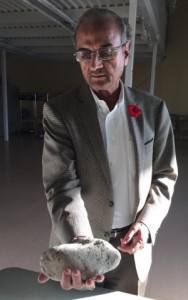 Mohan Kendall of the Ram Dham Hindu temple, showing one of the stones used in the vandalism.

At around the same time fire fighters in Peterborough were getting the call about the Masjid Al-Salaam fire, someone threw 5 large stones through the windows of the Ram Dham Hindu temple in Kitchener.

Waterloo Regional Police are not yet ready to call this a hate crime, or retaliation for the Paris attacks. But that’s probably only because they can’t believe that anyone would be stupid enough to mix up Hindu and Islam. That may be giving the culprits too much credit. Interestingly, the attack was carried out while the temple’s spiritual leader, Swami Chaitanya Jyoti, was out. Where was he? At a vigil at Kitchener City Hall, for the victims of the Paris attacks.

You may be wondering why it is that I – a resident of Burlington, who has no connection to either of these incidents or the cities they occurred in – am the one bringing up the stories. The simple answer is: Because it appears that pretty much no one else in the Canadian atheist, secular, humanist, or freethinker will. As with the mosque attack, I have not seen a single mention of this incident from any major Canadian atheist, secular, humanist, or freethinker organization. CFI Canada commented on the Paris attacks, of course, but since then the only comments they’ve made have been a tweet about “vaccine alternatives”, the Hippocrates Health Institute, a presentation about honour killings, and a “joint statement” issued to Trudeau about the attack on Tareq Rahim in Bangladesh; not a peep about any retaliatory attacks (or “potential” retaliatory acts) of religious intolerance following the Paris attacks. As for Humanist Canada, they also mentioned the Paris attacks, but nothing since. And here the only things discussed have been the etymology of “evolution”, “whiny” students (from Canada’s whiner-in-chief himself, Rex Murphy), Sam Harris reiterating that we’ve got to do something about those pesky brown people people who “look Muslim”, and of course why it’s vitally important that we make laws banning certain head dresses. If it wasn’t for Secular Lynx, I might not have heard about these incidents at all.

I hope you find this as troubling as I do. We demand that religions take responsibility for violence carried out for their sake. We demand that – for example – Muslims clearly and roundly denounce any violence carried out for the “benefit” of Islam. Do we not also have the same responsibility to clearly and roundly denounce violence carried out against religion? It is not inconceivable that these attacks were carried out by atheists or humanists, after all – or at the very least, people sympathetic to secularism or freethought. Whether or not that turns out to be true, it seems reasonable to expect that we should stand up and make it clear that such actions are not in accordance with what we stand for. For all the talk we throw around about being more moral, and more empathetic, than religious people, shouldn’t we be banding together as a community to help the victims of these attacks?

Look at us. Stop and take a look at ourselves. What are we doing? Fuck all, that’s what we’re doing. While churches and religious groups are coming together to show support, solidarity, and community, and actively and literally (not just offering “thoughts and prayers”) helping victims of religious intolerance, where are Canadian atheists? Is agitating for government control over women’s attire more important than making a clear statement against intolerance and vandalism? Doesn’t something seem wrong when the warden of St. John’s Anglican Church is a better model of humanism than the leadership of Humanist Canada? Or is it that these victims are not worthy of our attention because they’re religious?

Where is our attention? Where is our focus? What are the things we – Canadian atheists – really care about? These are questions I think we all need to seriously ask ourselves. Because from the general tone on this blog, and the behaviour of most Canadian atheist, humanist, secular, and freethinker groups, the answer seems to be that we care more about sticking it to religion, pseudoscience, and superstition than we do about actual people. We seem to care more about stripping clothes off of Muslim women, than we do about the fact that our fellow Canadians are burning the places they feel safe, and terrorizing them.

UPDATE 2015-11-18 16:50 EST: CFI Canada has spoken up about the incidents. I just missed it because it was on a page dedicated to reports of religiously-motivated violence. (See also the comment below by Eric Adriaans.) Excellent work, CFIC!

15 thoughts on “What is wrong with Canadian atheists’ priorities?”