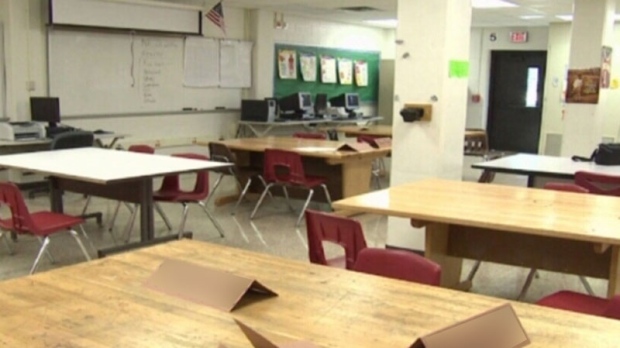 The photo above accompanies the CTV News article “Alberta School Boards Block Debate, Vote on LGBTQ Motion at Meeting.” The caption below the photo reads

An empty classroom is seen in this undated CTV file photo.

argued the issue wasn’t prominent enough and voted against dealing with the motion.

It will come as no surprise that

Most of the 24 boards that voted against allowing the motion to come to the floor for debate were Catholic.

sent a letter to school boards noting that provincial law requires boards to create a safe learning environment, including for LGBTQ students.

Eggan has given the boards a March 31 deadline to “to take action.”

Dave Eggen doesn’t need to to wait until the end of March. CTV News has already provided him with a solution: empty every classroom in every school that belongs to the the 24 boards that voted against allowing the motion to come to the floor for debate.  Stop funding these 24 school boards and begin the process to create one publicly-funded secular school system in Alberta. That’ll learn them!