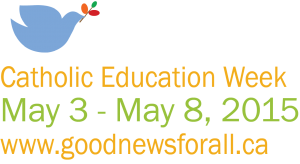 From May 4 to May 8, students in Ontario’s Catholic schools will be

Walking Together and Sharing [their] Story

Welcoming Others to the Table

Recognizing Jesus in the Breaking of the Bread

The Ontario government spends almost a billion dollars a year to fund Catholic schools, so Catholic teachers and students can indulge in “exploring paths of joy”!

Since all Ontario taxpayers are paying for Catholic Education Week, here are some questions they can ask those responsible for Catholic education:

Please free to submit additional questions in the comments.