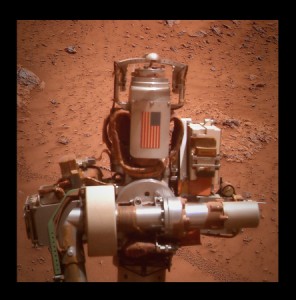 dedicated to following the ongoing mission of the Mars Exploration Rover ‘Opportunity’ as she explores the rim of the giant martian crater ‘Endeavour’!

On January 11, Atkinson was jubilant:

She did it. Opportunity did it. She reached the top of Cape Tribulation, and is now looking down from the summit, with gorgeous views of the rim of Endeavour on the farside of the crater and of her tracks leading back down the hill to the great Merdiani Plain far below.

He is celebrating Opportunity’s success for two reasons:

on one level, that image represents Opportunity following in the footsteps of generations of brave explorers and mountaineers by planting her nation’s flag on the summit of the pea she has just conquered. . . .

But on another level, that image represents much, much more than a simple flag-raising. It shows defiance and the triumph of intellect and science over the forces of ignorance and fundamentalism. This is a very dangerous, dark time for the world, I think most people feel that. The news is full of pain, death and bloodshed every day, and it’s hard not to feel like we’re standing in the shadow of a great storm that’s advancing relentlessly towards us. But as hooded terrorists were mercilessly slaughtering people in France, and holding others hostage, spreading fear and despair, on another world, halfway across the solar system, a piece of a building destroyed by other terrorists was being proudly and defiantly held aloft by a robot, proof that these insane, mad dogs will never win. They want to plunge the world into a new Dark Age of fear, repression and ignorance, but when they look up at the sky on a clear night they’ll see the space station crossing the sky, a lantern of science and technology drifting through the heavens, and there’s nothing they can do about it. . . . For every bullet they fire in hatred a thousand computer keyboard keys are tapped by people dedicated to helping others and advancing science and knowledge, searching for a cure for cancer, or designing a faster computer, or teaching children how to read. For every hostage they kill, a million people turn away from them, look up at the sky, and dream of a future free of their beliefs and violence.

Thank you Stuart Atkinson for the opportunity to share your jubilance and optimism.