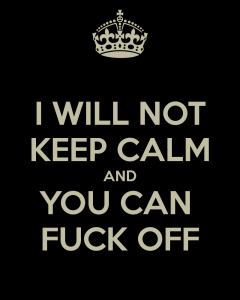 I wish I had said “Muslims Who Don’t Like Free Speech Can ‘Fuck Off,'” but Rotterdam Mayor Ahmed Aboutaleb said it first. The NL Times reports,

Rotterdam Mayor Ahmed Aboutaleb appeared on television programme Nieuwsuur Wednesday night, and lashed out at Muslims living in this society despite their hatred of it. “It is incomprehensible that you can turn against freedom,” he said. “But if you do not like freedom, in Heaven’s name pack your bag and leave.”

“There may be a place in the world where you can be yourself,” he continued. “Be honest with yourself and do not go and kill innocent journalists,” Aboutaleb, a Muslim himself, said.

“This is stupid, this so incomprehensible,” he also said. “Vanish from the Netherlands if you cannot find your place here.”

Mayor Aboutaleb also expressed remorse at how Muslims will now be looked at in the Netherlands. “All those well-meaning Muslims here will now be stared at.”

Bravo Mayor Aboutaleb! Let me add to your statement: “All those, religious or not, who don’t like free speech can fuck off!”

6 thoughts on ““Muslims Who Don’t Like Free Speech Can ‘Fuck Off’: Rotterdam Mayor””