A while ago… last april?… so uh… 7 months ago, I wrote a post about Melody Hensley from CFI DC and her claim that harrassment caused her PTSD…. and how that claim caused her to be harassed on twitter. Well… CFI has leaped into action to defend her… as they should… once their seemingly generous summer vacations were finished…

First, I fully support people’s right to speak and be heard on twitter, regardless of how stupid, and ill-suited to meaningful communication, I think that particular social media platform is. Freedom of expression is important to me, and although I don’t always agree with Hensley or any other random person at CFI, having the stones to speak your mind is something I respect.

First, many of the communications that accuse Ms. Hensley of making false claims mischaracterize the source of Ms. Hensley’s PTSD. It is not the use of Twitter itself, or any social media, that caused Ms. Hensley’s problems. It is the abuse she received via social media.

So I am going to nit pick a bit. Maybe it’s me, but invoking NRA logic, Social media doesn’t cause PTSD, Harrassers do… strikes me as an amusingly american thing to do.

They also compare social media to driving a car? Not a horrible analogy.. but it sorta neglects the fact that not all social media are created equal. Facebook might be like driving on the widened roads of some gated community suburb, but Twitter is more like a global demolition derby on planet psychopath. Next someone will be recommending 4chan-therapy.

I’m thinking someone suffering from PTSD might not benefit from that level of… therapy. But… I’m not a psychologist….

Speaking of twitter though… The big D is at it again, and PZ is not impressed.

Oh NO. Just checked my privilege. Turns out I’m a white heterosexual male. http://t.co/3I1J1dWRrq How can I atone? Hair shirt? Flagellation?

@RichardDawkins Nothing to atone for. Recognize your advantages, & use them to help less privileged. This shouldn’t be hard to figure out

I skipped to this part because I think it shows not only the silly nature of twitter, but also where these two atheist giants are missing the boat.

Dawkins is not just criticizing, he is trolling. Feminism might be full of ideologues(#notallfeminists), but that ideology is not generally based on the supernatural, so the ‘atoning’ commment is an obvious false equivocation.

On the other end, PZ makes the exact same mistake by equivocating ‘advantages’ with ‘privilege’. In this case, he is somewhat obtusely taking the Dictionary-Feminist position, while ignoring the modern Internet-Rage-Feminist usage of the word ‘privilege’.

If I were to say for instance:

My feeling is, that Dawkins would probably agree with that, as would most people who are not psychopaths or followers of Ayn Rand(or both).

But Dawkins is clearly not responding to that sense of the word ‘privilege’, rather he is responding to the way “check your privilege” is often used as a dismissive ad hominem against, those who don’t share the ‘social justice’ agenda, and when they are being particularly ragey, against anyone fitting in the #sizhetpenisoppressor (the snake in the feminist garden of eden) category.

Now, I could talk about how mocking men for crying is actually feeding into the same ‘patriarchy’ that feminists claim oppresses women everywhere all the time… but meh… rage-feminist hypocrisy is boring. And I still got my privilege yo… so why should I care.

Except… over the last few days, another twitter storm has caused emotional damage to someone who didn’t deserve it. A scientist who should have been reveling in a huge sciency success, but was brought to tears by the twitter attack dogs who couldn’t care less about science, and were oh so offended by his poor fashion sense. He wore a loud hawaiian style shirt to a press interview, a birthday present, made for him by a female friend, which sported some immodest pictures of women. 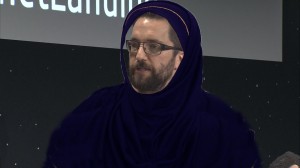 I have hijabbed the photo, because I’m a sensitive guy and I don’t want to trigger any of my fellow testosterone victims, with the wanton female form.

Sure it was a brain fart of an idea, to wear the shirt to an interview… but that dude had just completed what will probably be his life’s work, and despite what twitter would have you believe, a silly shirt is NOT an exemplar of what is keeping women out of STEM…. FFS.

There are lots of serious issues, like lack of childcare options, career paths that favour traditon male gender roles, societal gender norms, the gender bias of (male… and female) professors and employers…etc… that help limit the number of women in STEM… but stupid fucking shirts are not the fucking problem. And the people using this guy as a twitter scapegoat are douche bags on a supreme level. Oh, and the dumbass twitter shirt-defenders, who are now harassing the douche bags, are just as bad. Did I mention the twitter is the stupid? #asteroidrocketsomething #whocares