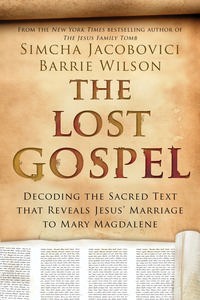 Does anyone care whether Jesus was married with children?  York U professor Barrie Wilson and filmmaker Simcha Jacobovici care; they wrote the book, The Lost Gospel: Decoding the Sacred Text that Reveals Jesus’ Marriage to Mary Magdalene.

Not everyone is convinced by Wilson and Jacobovici’s theisis. Mark Goodacre and Robert Cargill are more than skeptical; they are downright dismissive.

Mark Goodacre has looked at Wilson’s and Jacobovici’s “claims in greater detail, and it is clear that there is absolutely no merit.” Robert Cargill maintains,

“The lost gospel is not lost. And it’s not a gospel. Scholars have known about and studied [this text] for a very long time.”

“There’s been debate about whether Jesus was married for some time. But that’s the least of it. To me, it’s obvious that a first-century Jewish rabbi such as Jesus would marry and likely father children. . . .”

For others, the controversy surrounding The Lost Gospel is a tempest in a teapot.  Of course, there were first-century Jewish rabbis who were married and had children. However, whether Jesus was a rabbi or even whether Jesus was/is is not something that preoccupies unbelievers.

3 thoughts on “Jesus Married: Who Cares?”