The Globe and Mail tells us “Canada’s banks take pride in message of LGBT support.” First up is Ed Clark, chief executive officer of my favourite bank, Toronto-Dominion:

For nearly a decade, Toronto-Dominion Bank’s chief executive officer has been vocal about his support – shocking senior managers in 2005 with a speech about the need to defend gay rights, running ads that feature same-sex couples, breaking down crying at annual Pride events for TD employees. . . . . “Seriously, it was one of those moments in my life when time slowed down,” said Tim Thompson, now TD Asset Management’s COO, who had yet to come out at the time. “It was like he was talking to me … I had never heard a business leader ever, ever, talk about me.”

The Royal Bank Of Canada celebrates Worldpride 2014 in Toronto and the Pride parade with at billboard at its King Street West branch in Toronto: 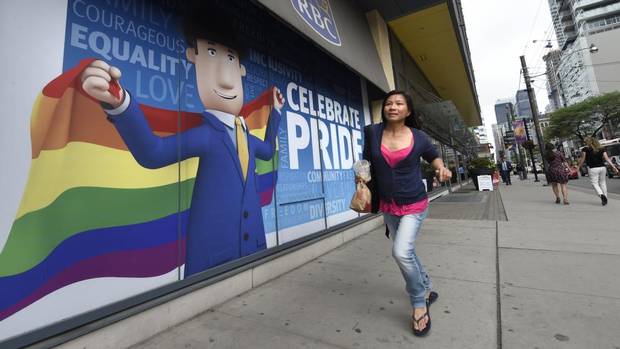 As the article points out

While their vocal support can seem like a public relations stunt, the banks say it’s a reflection of their internal commitments. If they win business in the process – gay people are typically well-educated, often affluent, and they travel more than the average Canadian, making them ideal clients – so be it.

So be it is right! I’m proud of the the banks’ efforts.