“If kids happen or someone is planning on children, there are ways of dealing with it and getting through it. It is all worth it.” 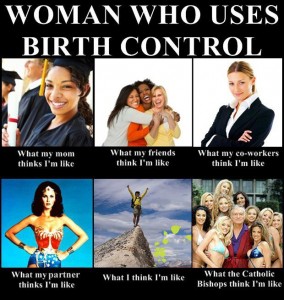 That’s what Calgary doctor Chantal Barry of Westglen Medical Centre stated in a 2010 U of A profile. She also cited God as one of her sources of strength in raising her children during medical school. So what is the significance of these admittedly quote mined statements? They provide some background as to why Dr. Barry’s “personal preferences” prevent her from  prescribing birth control pills at her clinic.

What?! This happens in Canada?! I expect to read about this sort of thing in the southern US states! According to the Calgary Herald,  Pam Krause, president and CEO of the Calgary Sexual Health Centre is as shocked as I am, as she expected to hear of this sort of thing  “….in really conservative places in the U.S.”

I suppose Dr. Barry is unfamiliar with the time before the birth control pill, when women were at the complete mercy of their reproductive system; the best way to understand this is to listen to Loretta Lynn’s song, The Pill.

Here is a link to her 1972 performance of the song. Loretta Lynn took a lot of heat for that song. According to an article published in  People’s magazine in 1975, “more than 60 radio stations from Boston to Tulsa…banned the song” and many a preacher railed against it from the pulpit. But in 1975, the song was a hit and people rushed out to buy it. Loretta Lynn explains it as:

The pill is good for people. I wouldn’t trade my kids for anyone’s. But I wouldn’t necessarily have had six and I sure would have spaced ’em better.

This controversy is 30 years old! Do we really want to live in a time pre birth control? Could Dr. Barry want to return to a time when, according to this Time’s article:

….abortion was illegal, women were expected to get a ring on their fingers before they had sex and women risked unwanted pregnancy and the associated stigma.

Because that’s the context for Dr. Barry’s views on the birth control pill! You’d think such a controversy would be over now but of course it isn’t. It isn’t over because religion is dogmatic. It doesn’t respond to reason. It doesn’t consider perspectives from other points of views (like Loretta and women like her). Religion can change (this is why people cherry pick parts of the bible in favour of the good parts) but at a pace that is far too slow. Christopher Hitchens was right; religion poisons everything.

via: Calgary doctor refuses to prescribe birth control over moral beliefs.
People’s article: Loretta Lynn’s “Pill” Is Hard for Some Fans to Swallow
Time’s article: How the Birth Control Pill Shaped The History of Casual Sex