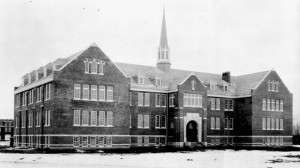 The Catholic Church is an expert at window dressing, and the present pope is its latest ornament. However, there are people who really think that the Catholic Church is going to become a kinder, more enlightened organization and that the new pope will prove to be better than the previous pope(s). These people are delusional. What is true is the Catholic Church continues to conduct itself as if it were above or outside the control of secular laws and injunctions.

The latest example of the Roman Catholic Church’s arrogance and failure to meet its financial obligations is discussed by John McKiggan in his latest post, “Catholic Archbishop in Alberta, NWT Apologizes for Residential School Abuse: Irony Abounds”:

CTV News has reported that Archbishop Richard Smith of the Archdiocese of Edmonton has issued a formal apology for the Catholic Church’s role in running the Indian Residential Schools.

“…we the Catholic Bishops of Alberta and Northwest Territories apologize to those who experienced sexual and physical abuse in residential schools under Catholic administration.”

McKiggan is skeptical about the “value” of Smith’s apology, and questions whether it is a  “Real apology or window dressing?”:

All residential school survivors will have to judge for themselves what value they place on the Archbishop’s apology. However for me, the apology is rather ironic given that just three weeks ago National Media reported that the Federal Government has been forced to sue the Catholic organizations that ran the Indian Residential Schools to get them to pay their share of the national class action settlement.

As part of the Indian Residential School class action settlement all of the religious entities that ran the residential schools agreed to pay 25 million dollars towards the cost of the 2 billion dollar settlement. Some critics suggested that since the catholic Church ran most of the Residential Schools, the Catholic church should contribute more than the other religious entities involved in the class action.

The Anglican, Presbyterian and United Churches have all met their financial obligations [. . .] however, the Catholic Church has contributed almost none of the 25 million dollars they were supposed to contribute to the overall Indian Residential School settlement.

The Canadian Government is taking legal action to force “dozens of Catholic organizations” to pay what they owe.

Apologies are a valuable part of the healing process. However, apologies must be backed up by actions. In the case of the Catholic Church it appears that the church is happy to offer words but fails miserably when it comes to baking up those words with cash for the victims of residential school abuse.

In 1930, while Catholic and Christian Churches were running residential schools where aboriginal children were physically, emotionally, and sexually abused, the Catholic Church canonized Jean de Brébeuf, one of the missionaries who introduced Catholicism to Canadian aboriginals, ruined their culture and destroyed their children.

The Catholic Church should pay for its sins against the aboriginals and it should get rid of the Martyrs’ Shrine,which was erected to honour

the eight Jesuit Saints who lived, worked, and died here over 350 years ago, celebrating the significant contributions they made to the introduction of Christianity into aboriginal culture as well as the founding of the Province of Ontario and the nation of Canada.

Fancy words that the Truth and Reconciliation Commission continues to expose as hypocrisy and lies.