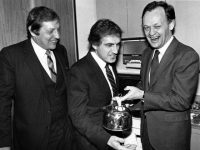 This photo is a picture of Roy McMurtry (former attorney general of Ontario), Roy Romanow (former attorney general of Saskatchewan), and Jean Chrétien (former Minister of Justice) posing for a recreation of the famous “Kitchen Accord” in 1983, where the notwithstanding clause was part of a hard-fought compromise that let the Charter actually happen. The kitchen itself no longer exists, but we’re still stuck with Section 33.