Yesterday evening, I attended, Jerry Coyne’s talk, Faith Vs Fact: Why Science and Religion Are Incompatible, at the Ontario Institute for Studies in Education (OISE) Auditorium in Toronto. This speaking engagement addresses, at a higher level, the content of Jerry’s latest book of the same name. The talk was very well attended with the auditorium full of approximately 140 people, all who seemed to arrive early! I will provide a brief synopsis of the talk below. 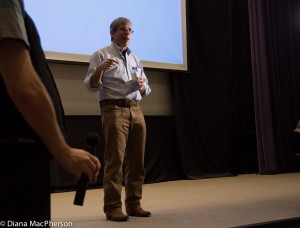 Jerry Coyne During Q&A at OISE

After defining “science”, “religion” and “compatible”, Jerry dispels the claim that science and religion deal with different subjects. Although many embraced Stephen Jay Gould’s “non-overlapping magisteria” (NOMA) when he introduced it in his book, Rock of Ages, his claim that religion addresses “meanings and values” and science the “factual character of the natural world” is demonstrably false, for the field of secular ethics has addressed “meanings and values” since Ancient Greece and by the admission of theologians themselves, religions make truth claims about the natural world: Christ rose from the dead, we go to heaven or hell after death, there is an omnipresent, omniscient and omnipotent force that looks over us, and wine and bread turn into the body and blood of Christ every Sunday during Catholic mass.

What stood out most for me in Jerry’s talk were the statistics:

The talk was interesting and positive but there was one sad part in the form of the Awake cover from 1994 that depicted all the Jehovah Witness children who died for refusing blood transfusions. Jerry presented this as a striking reminder of the damage religion does.

Questions from the audience were good ones:

Overall, it was a fun evening with an informed audience (happily devoid of any religious proselytizers posing as question askers).

One thought on “Jerry Coyne in Toronto – Faith vs. Fact: Why Science and Religion Are Incompatible”