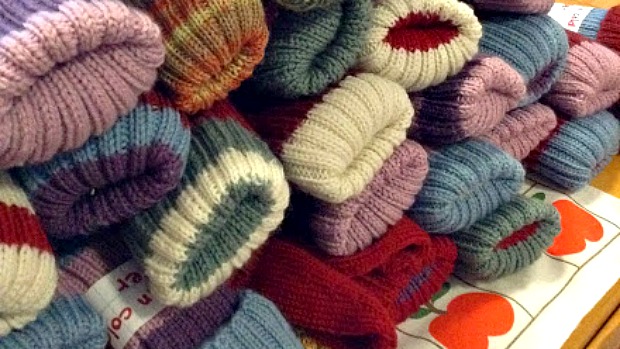 Today, on CBC Radio’s The Sunday Edition, Michael Enright talks about “The City Where It’s Against the Law to Be Poor.” Today’s topic is a follow up to a February 24, 2013 episode “Socks for the Homeless“:

Take a moment and think about socks. Yours are probably cosy.. They’re probably dry. And they keep your feet feeling pretty good. Next time your toe pokes through one, you’ll probably toss it. And next time the dryer devours a sock, you’ll probably ditch its mate. Socks are cheap, disposable, easily replaced.

Unless you live on the street. For homeless people, those little pieces of clothing are mittens of comfort. Hard to come by, easily ruined. Never taken for granted. Good as gold.

Listen to the audio version of the 2013 episode for the reactions of the homeless as they receive new, dry socks.

Enright was inspired to do a follow up because of a letter from “Wendy Ospina of Toronto, who wrote on behalf of her mother Helen Bennet”:

“Last February, I heard your documentary about socks for the homeless. I was touched by how important socks are to the homeless — how warm socks are critical to their survival. . . .  In March, my Mom  . . . fell on the ice, shattering her femur.  Her doctor told her she would have to stay off her leg for three — and maybe as long as six — months.  Being a very active woman in her 70s, she was devastated.

My solution was to give her a project to keep her mind occupied. I bought her wool, and gave her a goal: to knit socks for the homeless. Her sock knitting became a thing of legend among the residents and staff at the respite facility where she lived for 5 months.

I am enclosing two pairs for you to give away to someone you see in need. Thank you for your documentary. It made a difference.”

In the audio version of “The City Where It’s Against the Law to Be Poor,” Enright criticizes Ontario’s Safe Streets Act and comes up with a solution:

I discovered a way to assuage my conscience about handing out nickels and dimes to panhandlers. I hand out socks instead. You can buy half a dozen of them at a dollar store for a couple of bucks.

Although most of us won’t be able to produce socks like the ones pictured above, we can all make a difference by purchasing warm, cotton or wool-blend socks and giving them to the homeless people we meet as we stroll through our community.

2 thoughts on “Michael Enright: “Socks for the Homeless””