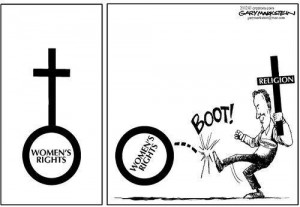 Life in a liberal democracy is never as fair as you’d expect it to be. Case in point is the latest deference to religion in favour of violating the principle of gender equality.

According to CBC, on Monday, July 28, Pearson International Airport’s Canada Border Services Agency (CBSA) granted the request of a group of Hindu priests to be screened only by male border guards at Terminal 3. The Hindu priests, called Sadhus, explained that they are forbidden to have contact with women.

You may think this is a trivial incident. Why not accommodate visitors to our country so that they feel comfortable? I completely agree that we should treat visitors with respect, but my politeness stops when doing so violates someone else’s rights. As the person who came forward with this incident rightly points out:

People are saying ‘What is next? If white supremacists come through, do we move all non-white officers from the line?'”

I have to agree. Accommodation can go only so far and religion gets no pass!