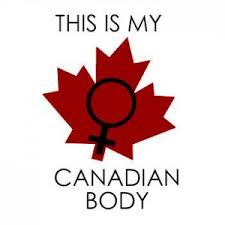 Canadian women are in danger of being denied easy access to abortion:

The Morgentaler abortion clinic in Fredericton will close at the end of July following a 20-year fight with the New Brunswick government over funding.

This is particularly significant because New Brunswick’s

Department of Health has always refused to cover abortions performed at the clinic, making it the only province in Canada with a private abortion clinic that isn’t funded by medicare.

“Regulation 84-20 remains on the books and New Brunswick women will now have no option to access abortions in the province except by meeting its discriminatory and medically unjustifiable requirements,” according to a statement issued by the clinic.

In New Brunswick, doctors, not the woman, get to decide whether a woman is allowed an abortion:

The province pays for abortions at two hospitals, but only if a woman gets approval from two doctors who certify the procedure is “medically necessary.”

So a woman is at the mercy of two doctors, who may be “anti-choice doctors,” when only one person should make the decision: the woman herself.

Imagine being dependent on doctors whose personal feelings about abortion affect their medical decisions. Moreover, how does “’medically necessary” enter the equation?

At first, when Peter Ryan, executive director of the New Brunswick Right to Life Association, heard the clinic was closing he thought his “prayer[s]” had been answered.  However, now he things it is a “stunt” perpetuated by the clinic:

There is no evidence that closing the Fredericton clinic is a “stunt.” There is evidence that with New Brunswick’s “discriminatory and medically unjustifiable requirements” women are at risk. As Joyce Arthur, executive director of the Abortion Rights Coalition of Canada, points out,

“The province created this crisis and showed callous disregard for women’s health needs. As we’ve seen in P.E.I. where there’s no access, some women will harm themselves in attempts to induce an abortion,” Arthur said in a statement.

“If N.B. does not improve access quickly, women’s health and safety is at risk, especially young women and disadvantaged women.”

New Brunswick is discriminating against women and putting them at risk, and when women are at risk, their partners and their children are at risk.

One thought on “Morgentaler Abortion Clinic in Fredericton to Close”