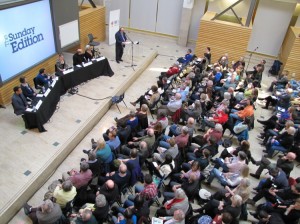 Panellists and Michael as the forum gets underway

Spencer Lucas was in the audience for the taping of CBC’s Radio One The Sunday Edition show “The Public God – A Forum on the Role of Religion in Public Policy.”

I was immediately disheartened by a few things. Before Enright even introduced the panel of six, it appeared that there would be no non-believer represented on the panel. I originally wondered if this was related to Enright’s comments made only months ago in an attempt to silence atheists. “The problem to me is that [atheists] won’t shut up about it!” Enright also described atheists as whiny, whinging, self-pitting, and narcissistic.

I was wrong about there not being a non-believer/atheist in the group, but I could be excused for the assumption because the only self-declared atheist had the title Reverend before her name. However, it was Greta Vosper who made one of the most poignant comments of the night. She first premised her important point with a “this may be controversial,” but declared that ideas are not deserving of respect de facto, a notion that was largely lost on this particular panel.

But as much as Rev. Vosper voiced some atheistic and reasonable sounding ideas, it was forever couched in cringing apologies and deference. Perhaps this is the curse of spending so much time in inter-faith discussions as she does, but it sets this atheist’s blood a-boiling. Probably three times she answered a question with something like, “I don’t want to sound like a whiny atheist. . . ” I found it ironic that she seemed to request forgiveness for what may be interrupted by some as having a little bit of tone, when the good Father De Sousa didn’t break a sweat when responding to a question of child rape in his Church. As an aside, he seemed to have no problem asserting things he clearly didn’t know as if he knew them, but that is a whole different issue.

I have no time for one atheist apologizing for other atheists. Don’t apologize for me; I’m fine thank you very much. We have enough apologetics coming from theists; we don’t need them coming from atheistic Reverends as well.

Professor Richard Dawkins was held up by Rev. Vosper and Father De Sousa as a bit of a whipping boy. He must be sore from being almost the sole focus for anything remotely approaching atheism. And he gets criticism from both sides. I could hardly believe my ears when I heard, what is becoming an old canard now, that he, and many others are fundamentalists. I won’t bore you with a defense of this, but suffice it to say that theists love using it (even fundamentalist theists ironically) and so do their accomodationist comrades.

Enright, came back to one question a couple of times: “what’s with all this God talk?” He highlighted what many on the panel seemed to agree on: there is more public conversation about religion now than ever before. I also agree with this assertion and, as one of the panelists, Moustafa Bayoumi, suggested: there are many reasons this is so. Out of all the reasons given, one, the idea that religion used to be off limits in polite conversation, touched on an important development in the atheist movement that was missed in the 2 hour show. Indeed it was missed because to give it voice would be to credit the very atheists Enright, De Sousa and Vosper were calling to task. It was the unapologetic nature of Dawkins and the so-called New Atheists that helped break down those barriers, to break the spell, as philosopher Daniel Dennett puts it, and allow not just atheists a place at the table but allow a full and public conversation about God and his place in our society.

Perhaps the most heartening part of the evening was the engagement by the audience. If the rare and few applauses were any barometer, there was a strong non-religious and/or secular public in attendance. Indeed the nature of the questions during the second half was almost exclusively secular/atheist in nature. Perhaps the audience was the seventh uninvited panelist that made the panel close to representative of the Canadian public where about 30% identify with no religion.

So despite a meandering and unfocused conversation on an ill-defined public god, and a peppering of untruths, and a reverend atheist, eventually, atheists did speak out in the form of an engaged public. And perhaps this annoyed Mr. Enright as I hear the words he spoke last September from his CBC ‘pulpit’, “It’s just that instead of shouting their assertions and beliefs, in booming voice, [atheists] could maybe whisper as though they were in a library or a – church.

You can listen to hour 1 and 2 of the Public God Forum on CBC Radio One now.

9 thoughts on “An Atheist and “The Public God””