The Freedom of Thought Report is an annual/ongoing report put together by the International Humanist and Ethical Union (IHEU) to chronicle systemic discrimination against nonbelievers in countries around the world.

The result of this focus – and the thing that irks most Canadian readers – is that the US manages to score 1.5 / “Mostly Satisfactory” despite widespread religiosity and intolerance of nonbelief, while Canada scores 3 / “Systemic Discrimination” (scores are on a scale of 1 to 5, higher scores are worse). However, that’s perfectly in line with the report’s logic: as bad as it is for nonbelievers culturally in the US, the bottom line is that nonbelief has much better legal status there than in Canada. The have the “Establishment Clause” in their Constitution requiring laws to be secular; we have constitutionally protected religious schools.

So, how’d Canada do? 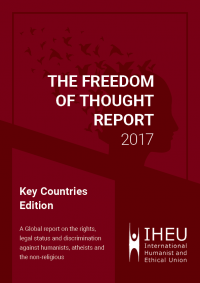 The 2017 Freedom of Thought Report.

Well, it doesn’t look like Canada’s data has been updated since 2015, so the data is 2014 vintage. There’s a quote about our prime minister that is clearly referring to Harper, not Trudeau. Even the grossly dishonest framing of Syndicat Northcrest v Amselem hasn’t been fixed.

On the one hand, that sucks, because it means it doesn’t take into account all the progress made since Trudeau took power. We have a new law protecting journalistic sources from authorities, and of course the blasphemy law is on the chopping block.

On the other hand, that’s a good thing, because it doesn’t take into account all the bullshit about banning veils and religious accessories in general.