I have been asked by a couple people to make a clear statement specifically on Québec’s Bill 62 as passed. So here it is: It’s garbage. Clear enough?

To keep on the theme of clarity, let me also be clear that this is not the “official” position of Canadian Atheist. CA is not an organization – it’s just a platform shared by several distinct voices of Canadian atheists – so CA itself does not hold any positions. This is me speaking for myself, as a private individual, as a Canadian.

I am also compelled – by the stupidity of so many supporters of the bill – to assert that I am not pro-niqab or pro-burqa, and never have been. It’s a standard tactic of supporters to conflate support for a woman’s right to wear a niqab with support for the “symbolism” of the niqab itself (whatever that may be; like all symbols, the niqab means different things to different people); when you don’t have any real arguments in support of a position, you use whatever fallacies you think you can pull off. I have never once – in my entire life – written anything approving or positive of any “modesty garments”. I support people’s right to choose; that doesn’t mean I don’t think some of their choices are stupid or disgusting.

The main problem with Bill 62 is that no one seems to know exactly what it is. Not even the Québec government, even taking their blatant dishonesty about it into account. For almost a week, people were basing their interpretation on the Bill’s actual text, and coming to the conclusion that a ban on using public services with one’s face covered means a ban on riding the bus while wearing sunglasses. A conclusion that, by the way, was fully supported by Justice Minister Stéphanie Vallée’s comments.

But then, a week after passing the bill, Stéphanie Vallée belatedly felt compelled to “clarify” the bill. That “clarification” turned out to be a complete reversal of her previous statements, and an interpretation that has no connection whatsoever to the Bill’s text. Now you can ride the bus with your face covered; you only need to show it if you are using a photo ID.

How magnanimous of the Québec government. Honestly, though, if even Justin Trudeau thinks it’s safe enough to dump on your “clarifications”, they must be really, really bad.

Except… hold on a sec… was it possible, before Bill 62 in Québec, to use photo ID without showing your face? Of course it fucking wasn’t! In what bizarro world could a Québécois expect to flash a photo ID to a government official while wearing a niqab, and have the official shrug and say: “Yeah, the eyes look right.” Or is the photo ID actually a photo of the woman wearing her niqab? In that case, does the woman have to make sure she wears the same niqab every time she wants to use he ID? 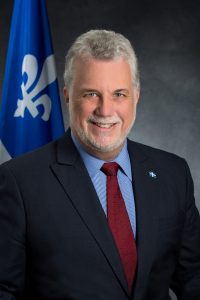 So what exactly is Bill 62 supposed to be accomplishing?

It’s obvious what we’re seeing is not in any way sensible government policy. Every statement that’s come out of the Québec government about this law has been one spectacularly bad ass-cover attempt after another. I suppose, on some level, we should thank the Québec Liberals for sacrificing their own political careers to show that you have to be an idiot to support such a bill. That may be the only public good they manage to accomplish out of the whole mess.

I can’t even see a decent political motivation for the Bill. There have been pundits speculating that Couillard had to skewer himself on this issue. Fuck no he didn’t. He could have taken a principled stand that his government would not cave to racist sentiment, no matter how popular, then left it for the other parties to die on that hill if they dared. Instead, he took the bullet for them. That’s not political savvy; that’s political stupidity.

I would love to criticize the specifics of the Bill itself… but what are they? I’ve seen at least a half-dozen different interpretations of this law over the course of its passing and since. By the time this post goes live, the Québec government may have offered another one still. All of them are stupid and offensive, but I can’t very well criticize every single one. Even the core element of the Bill – the veil-slash-face-covering ban – has changed several times. Criticizing the Bill is like trying to swat a single fly in a swarm, and the target fly keeps changing.

As bad as it is for criticizing, it’s been even worse for supporters. More than once now they’ve mustered passionate (though irrational) arguments in defence of the ban, only to have the rug pulled out from under them when it changed. I suppose they at least deserve credit for gamely trying to keep coming up with “arguments” to defend each iteration, even when those “arguments” directly contradict the “arguments” they used for the previous iteration.

That’s the reason I haven’t bothered with a specific criticism of Bill 62 before now; there hasn’t been (and, arguably, still isn’t) a specific Bill to criticize.

What I’ve done instead is chip away at aspects of the various ban incarnations and their defences. I’ve called out the subterfuge that it has anything to do with secularism, I’ve brushed away the attempts at distraction, and I’ve disassembled the justification attempts of supporters, whether they’re casually throwing rights away or inventing them ex nihilo. Against a moving target like Bill 62, that’s really the best I can do.

So Bill 62 is garbage. It’s so much garbage, it’s not even possible to critique it. If someone wants to pin down a specific idea – like a specific form of religious symbols ban (or “face-covering ban”, if you’re enough of a sucker to actually buy that), or a specific defence of such a thing – I’ll be happy to dig into that.

But as for the Bill itself, it’s too much garbage to even warrant serious criticism. I’m just going to sigh and shake my head despondently at the idiocy of people who think this kind of ban is sensible in a free society, and the abject cravenness of the Liberals for caving to those idiots and their racist brethren.