The Québec Liberals are once again floating the idea of a bill banning the wearing of religious accessories in public spaces. It’s a transparently political ploy, as the idea always has been, but depressingly, a lot of atheists have been hoodwinked into believing that it actually makes some kind of sense. Some even believe that it is necessary in the name of “secularism”. It’s time to put these misconceptions to rest once and for all.

The idea that the government should ban the wearing of religious accessories has been floated particularly in Québec for almost a decade now, and probably even longer. It’s been picked up by some nonbelievers outside of Québec, though not by the general Canadian public. Virtually all secularist, humanist, atheist, and freethought organizations across Canada reject it, and even Québec’s own human rights commission has called it clear setback for human rights and freedoms. Arguably it has only ever been a political gambit, first by the Parti Québécois attempting to secure the xenophobic vote in the 2014 election, and now by the Québec Liberal Party probably attempting to link their opponents’ support for the idea to the alt-right and its wave of intolerance.

The precise form of the ban varies depending on who you ask and when. 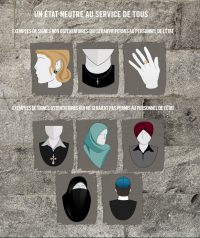 All this variation makes criticizing the idea a royal pain in the ass. It’s like criticizing religious believers: You start to criticize the most common form of their belief, only to have them stop you and ridicule you for attacking a straw man, because that doesn’t happen to be the precise formulation they believe. So you try to suss out exactly what it is they do believe, and they dodge and dissemble and never give you a clear definition. Eventually you’re forced to guess based on clues they’ve given and the most common versions of the belief, but if you don’t get it precisely correct they brush you off for attacking a straw man again. Repeat ad nauseum.

Thing is, it doesn’t really matter precisely which variant of the idea you believe. The fundamental basis of the idea – its very core – is plain wrong.

The most insidious lie associated with the idea of a religious accessories ban is that it has anything to do with secularism.

This is the lie that the bigots use to add a gloss of respectability to what is, on its face, simple bigotry. This lie has done so much damage to the formerly respectable image of secularism that the term may never recover from the stain. “Secularism” is so dirty now that when the Supreme Court ruled in favour of secularism, they avoided using the term, preferring “neutrality” instead.

The most common form of the lie is that there are “different views” on secularism, and the Québec view is just a product of their unique culture: different, but equal. People who regularly pooh-pooh the “different ways of knowing” argument actually swallow this line, with no sense of the irony. But this is not an issue of different cultural viewpoints. The point of secularism is that it transcends divisions like culture, ethnicity, and belief. Secularism, done properly, works the same for everyone, everywhere, everywhen. So it simply can’t be true that there is a special form of secularism in Québec that differs from secularism everywhere else.

And it isn’t true. And the evidence of that is exactly in the place that Québécois proponents of bans usually say people should look: in Québec’s history and culture. What Québec religious symbols ban proponents are basing their position is laïcité… not secularism. That laïcité is often rendered into English as secularism is simply a case of sloppy translation. Because laïcité is decided not secularism, and a look in Québec’s history and culture proves that definitively. Laïcité is secularism plus French (or in this instance, Québec) nationalism, plus anti-clericalism. The support for banning religious symbols comes either from the anti-clericalism or the nationalism; it varies from individual to individual, depending on how much racism and xenophobia is involved.

A truly secular government would be one that:

Both of the above factors are relevant for this issue.

The first is what proponents use to argue for a religious symbols ban, under the tortured “logic” that a passport office clerk wearing a hijab or a bus driver wearing a dastar influences, or at least appears to influence, the decisions of the state. How they can believe this is so I’m not sure; no matter how many times I ask I never get a coherent answer.

A related claim is that the wearing of a religious accessory is, in and of itself, proselytizing. This is also obvious nonsense. In what way is a person wearing a hijab sitting on the bus seat next to you minding their own business either trying to convince you that Islam is “better”, or trying to convert you? It takes an astonishingly egocentric view of the universe to imagine that someone who merely walks past you on the street wearing a dastar is trying to convince you that Sikhism is better.

Believing that someone wearing a religious accessory is pushing their religion requires the same kind of ignorant and bigoted mindset as believing that a gay couple holding hands is pushing a “gay agenda”. Simply wearing a religion’s particular accessory is not “pushing” that religion; it is being that religion. Pushing that religion would be trying to make you wear the accessory… or, ironically, trying to make you not wear some accessory you are wearing that offends their beliefs. Hint, hint.

So individuals freely choosing – as private individuals – to wear a religious accessory does not violate secularism. In a free society, individuals should have the right to do and wear whatever they please, so long as it doesn’t interfere with the safety or freedom of others. Such a simple idea, yet it soars over the heads of veil ban proponents.

There are situations where there is a rational, secular argument for restricting what people can wear. Obviously that includes safety gear, but it also includes uniforms. Whenever there is a reasonable need for people to be able to identify particular people or members of an organization, there is a good argument for a uniform. For example, it is perfectly reasonable to require doctors at a hospital to wear certain regulation clothing – it makes it easy to spot one when you need them in an emergency, and it makes it easier to spot someone who shouldn’t be somewhere (for example, someone sneaking in to do a patient harm, or steal drugs, or whatever). But when a uniform is required, it should be chosen according to reasonable and practical restrictions. When there is no need to restrict what a person wears on their head – in the case of doctors, for example – it would be unjustifiable to ban the wearing of religious headgear. Even when headgear has been included as part of the uniform, such as with police, it is unjustifiable not to have options for people with special requirements. There is no good reason not to consider religious requirements; the mere fact that you happen to dislike religion is not reason enough. So long as the religious requirements can be reasonably accommodated, they should be.

Many of the proponents of a veil ban completely lack any sense of irony, because they are often the same kind of people who will defend blasphemy with the argument that no one has a right not to be offended. Then they’ll turn right the hell around and argue for a religious symbols ban solely because the symbols are offensive.

The one final argument to consider is that allowing people to wear their religious accessories is “favouring” their religion. That requires a dishonest interpretation of “favours”. Merely allowing something to exist unmolested is not “favouring” it… unless you’re routinely and generally intolerant of letting other things exist; only if you are persecuting other religious beliefs (and nonreligion) would it be “favouring” a religion to not persecute it. Treating all beliefs the same, whether they are religious or not, is not “favouring” any religious belief; if any person has a genuinely, deeply-held reason for wanting to wear a particular accessory – and wearing that accessory does not get in the way of health and safety concerns, or the rights and freedoms of others, or any other rational concern – then their need to wear it should be accommodated.

So the bottom line is there is simply no secular argument in favour of a religious accessories ban:

This isn’t rocket science. There is a very simple to check whether an idea is actually a secular idea: Just ask whether a tolerant religious believer would support it. What people who think religious symbols bans forget is that secularism isn’t just supposed to be good for nonbelievers, it’s supposed to be good for believers too – which is why so many religious people support secularism. Unlike the anti-religious intolerance of laïcité, secularism allows the free practice of religion by citizens… so long as that practice does not infringe on any else’s rights. And I’m still waiting for an explanation of how a bus driver wearing a dastar or a passport office clerk wearing a hijab infringes on anyone’s rights.

I should note that from a legal perspective, this whole debate is moot in any case. The Supreme Court has already signalled in the Mouvement laïque québécois v Saguenay (City) ruling that a religious symbols ban would not survive a Charter challenge, something that numerous legal experts have also noted.

I am under no illusion that this article will end the veil ban debate. Frankly, the people promoting the ban have no interest in being reasoned with; and I say this as someone who has tried repeatedly. Proponents want to ban the expression of some or all religions simply because they hate those specific religions or religion in general. That’s all there is to it. There’s no reason behind it. It’s just straight up intolerance.

But at the very least I hope this will be one small part in ending the dishonest practice of pretending that bans on wearing religious symbols are secularism. Oh, I full expect proponents will continue to call it secularism. But perhaps this article will help people realize that when they’re doing it that, they’re asserting it as a “just-so fact” with no explanation, no justification, and no real basis.

The next time you see someone trying to spin a religious accessories ban as “secularism”, challenge them. Ask them to explain exactly how you get from a requirement that governments take no positions on religion or religious beliefs to restricting the freedoms of individual religious believers. Don’t let them gloss over it and hand-wave away the inconsistencies and lack of real justification.

Secularism has suffered a hit to its stellar reputation due to the dishonesty of veil ban bozos. Let’s save it from hate.

20 thoughts on “Religious accessories bans are not secularism”