The Angus Reid Institute has released a report on a survey about Canadians’ knowledge of genetically modified organisms (GMO) with some very disappointing results.

First the good news. In the survey, respondents were first asked a pair of general questions about their food concerns, of which GMOs were one of the options:

Here are the results to the two questions: 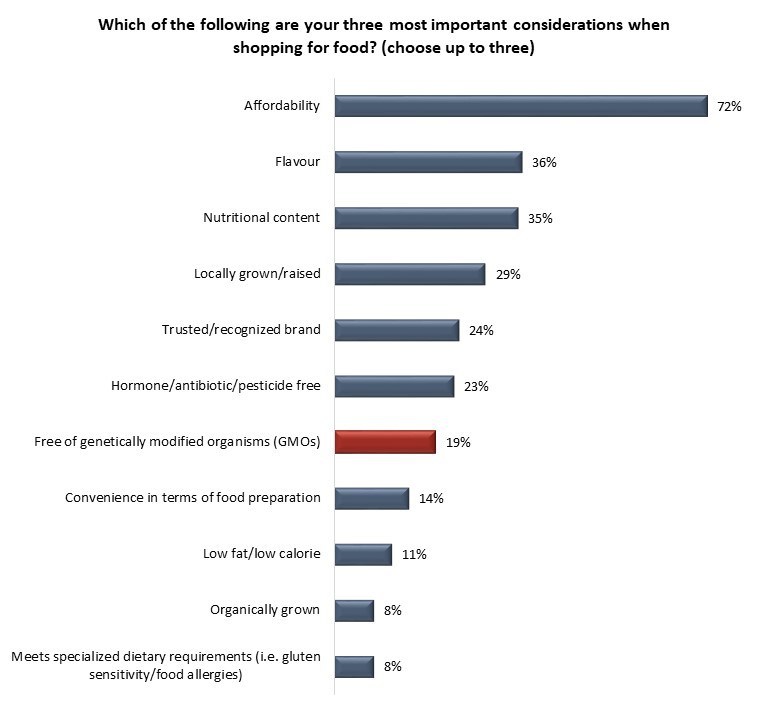 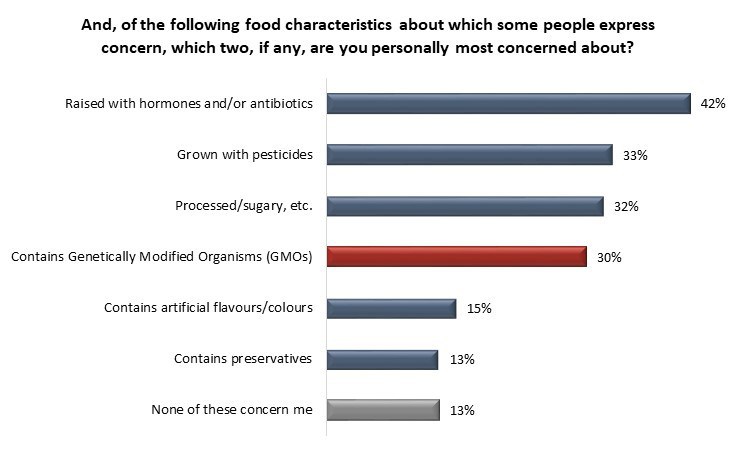 As you can see, GMOs don’t really rank all that high in Canadians’ concerns at the supermarket. They don’t rank as low as they should, but GMO terror hasn’t really taken hold in Canada.

In fact, in a later question in the survey, respondents were asked if they thought GMOs were “unsafe”. Even among those who said they were unsafe, they cared more about affordability: 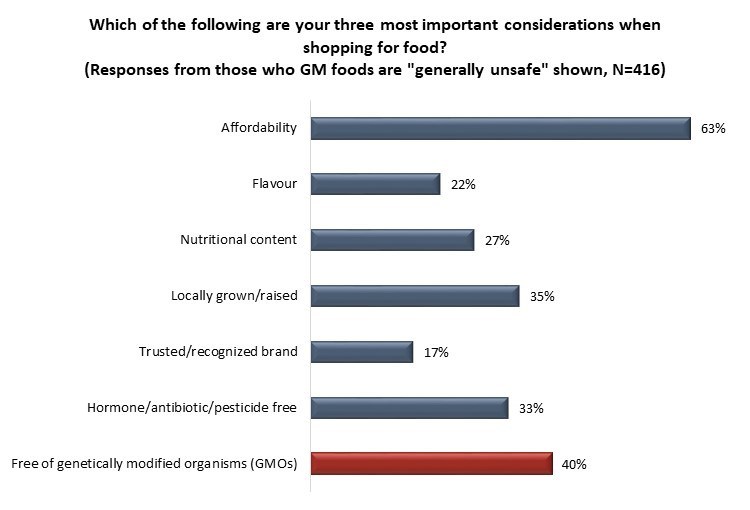 After being asked those two questions above, respondents were given a fairly vague description of GMOs:

A Genetically Modified Organism (GMO) is a living thing whose genes have been altered through genetic engineering. GMOs are used to produce many medications, foods, and other goods, and are widely used in scientific research.

Some examples of GMOs include crops that have been genetically engineered to have better nutrient profiles, or to have desirable traits for cosmetic reasons (for example, an apple that doesn’t turn brown when cut).

Right after being given that description, respondents were then asked how familiar they were with GMOs:

Now, you have to take the above results in context with the fact that these are Canadians being surveyed. It’s a quintessential Canadian virtue to not overstate your knowledge of a topic, even if you think you know quite a bit about it. So don’t read 60% “know a little” about them as meaning that 60% of Canadians think they “know little” (note that “know little” ≠ “know a little”) about them. More likely than not, most people who think they know plenty enough about them to spout off their opinions are in that category. We can make the very rough assumption that only 10-15% actually think they only know a little, and the remaining 45-50% don’t consider themselves experts on the topic but think they understand it well enough to make decisions and lecture others – they “know a little bit about them” in the Canadian sense. So if we take that estimated 45-50% and add it to “very familiar” group, we can figure that ~60% of Canadians think they know enough about GMOs to have informed opinions on the subject.

The first real question respondents were asked in the explicitly GMO section was whether they think GMOs are generally safe to eat. 39% said “generally safe”, 28% said “generally unsafe” (33% “not sure”). Good, but not great. It’s at least uplifting that the GMO fear campaigns have only succeeded in fostering mostly uncertainty, rather than outright rejection, but there’s clearly a lot of work to do.

The problem demographics, starting from the worst, were:

The demographics that get it right, from best, are: the prairie provinces, young and middle-aged males, higher-educated (university or better), and wealthier Canadians.

Things are still not looking that bad yet. But now we come to the last two questions. Brace yourself.

The second last question was this:

To the best of your knowledge, which of the following techniques for introducing desired traits in food crops are considered “genetic modifications” – that is, the foods resulting from these techniques would be considered GMOs. (Choose all that apply)

The correct answer is: all of them. All of those methods modify the genes of an organism to create a new “species” (new breed/new line/whatever, I’m not hip on the terminology – basically your breeding group will now have a different gene pool after than it did before). Of course, most of the fear being spread by anti-GMO groups only talks about “frankenfoods” created via recombinant DNA with transgenes (from other species), but all of these are genetic modification techniques.

So how’d Canadians do? 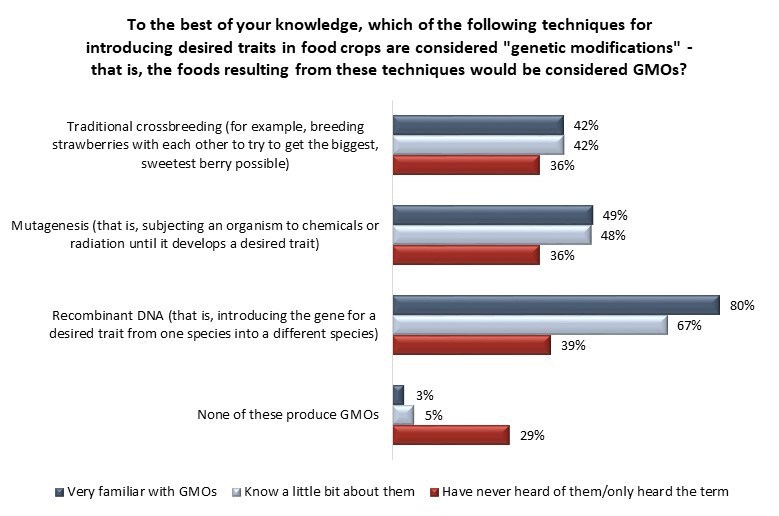 Even among people who considered themselves very familiar with GMOs, they only got 1 out of 3 right on average. There wasn’t really any difference between those who claimed to be very familiar, and those who only “know a little”. In fact, they did only slightly better than people who were admittedly clueless about the topic!

The ignorance was pretty consistent across demographics. There were a few amusing blips: For example, men are more likely than women to say GMO foods don’t need labelling… but men are also more ignorant than women about what GMOs actually are. (Or if the genders are equally ignorant, men guessed worse.)

So what can we take away from this survey?