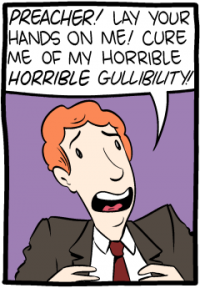 Normally when a preacher is laying their hands on you, it’s not to cure your gullibility.