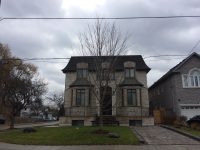 This tree is clearly a violation of vastu.