Organ donation is a difficult issue to bring up on a good day, but it’s a vitally important one. There are around 4,500 people on the wait list nationwide, and every year approximately 250 people die while waiting. Unfortunately, Canada’s organ donor rates are depressingly low; there’s about a 10% negative differential between donors and those in need.

Canada doesn’t have a national organ donor registry;* organ donations are handled via a patchwork of provincial health services. The rates vary wildly across Canada. The most common metric used to measure organ donation efficacy is “deceased donors per million population”, or DPMP, which is a measure of how many people’s organs were actually collected and transferred to another patient after the donor’s death (as opposed, to say, living donations, where someone donates a kidney). According to numbers released by Canadian Blood Services in September, Nova Scotia had the highest DPMP at 21.2 (this number includes P.E.I., followed by Québec at 20.8, B.C. at 20.1 (includes Yukon), and Ontario at 19.5. The national average is 18.2.

* (Actually Conservative MP Ziad Aboultaif introduced a bill to create a national organ donor registry last year, but it was defeated 131–171 in June. The argument against it was that it created a host of jurisdictional issues, and there were programs to deal with the problem already in development.)

How does that stack up worldwide? Not so hot, unfortunately. 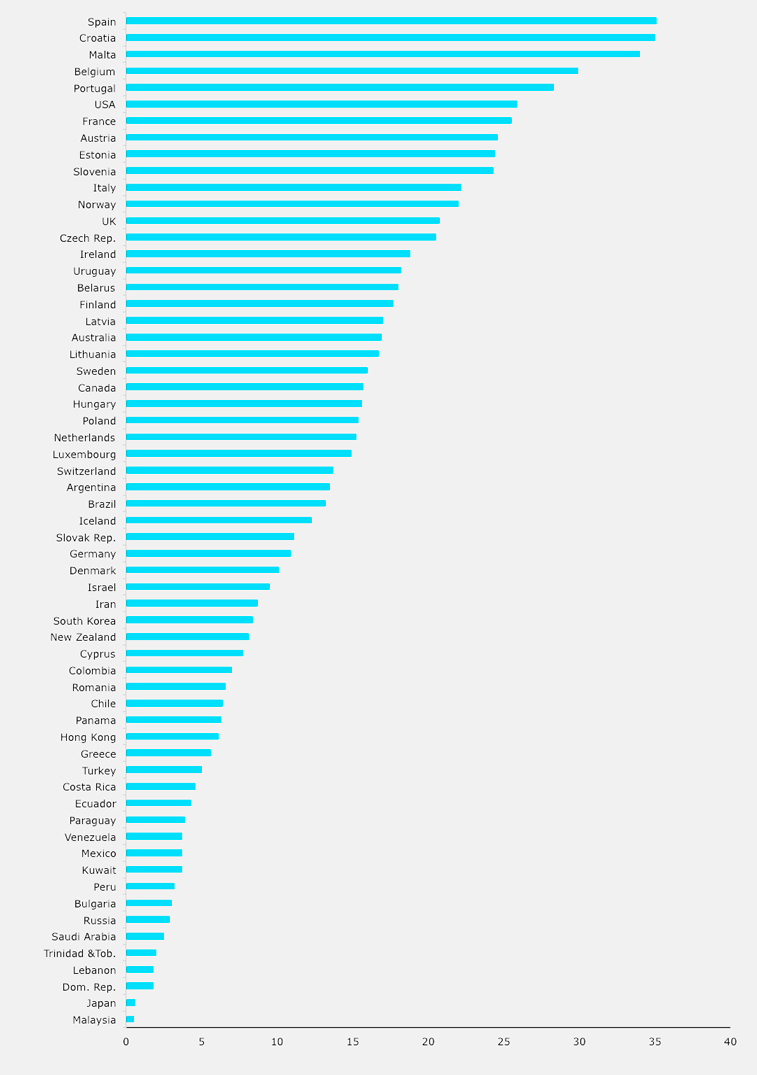 There are a lot of factors at play in the DPMP metric, but one of the most obvious and most important is the number of donors. In Ontario, there are around 340,000 registered donors. That’s around 30%. Sounds good, right? Well, no. First of all, the number of Ontarians who think they are registered organ donors may be as high as 45%… these are people who have paper organ donor cards in their wallets, but who were never registered under the new electronic systems. (I had to check myself to confirm that I was registered; luckily I was.) But even aside from, that surveys (unfortunately, I couldn’t find any) apparently show that the number of people who would consent is much, much higher… these people just never get around to actually registering.

Which leads to the obvious idea of an “opt-out” registry, rather than “opt-in”.

I have tried to find rational, secular objections to organ donation, and I can find none. I have also tried to find rational, secular objections to presumed consent for organ donation, and the best I could find is the concern that emergency room medical practitioners would be incentivized to… not try so hard to save people… or to presume death too quickly,* in order to harvest more organs. But this objection doesn’t really hold up. First of all, it’s a rather ridiculous view of medical professionals – they have no real incentive to murder one patient so that some other doctor somewhere else can save another. But it also falls apart when considered in context: if presumed consent were in force, then there would be millions of potential donors, so there simply wouldn’t be much need to murder to get an organ or two.

* (There are actually issues with presuming death, and there are at least two standards used in Canada: neurological death (NDD, sometimes DBD) and circulatory death (DCD). NDD is used across Canada, but DCD is only used B.C., Ontario, Québec, and Nova Scotia. That list of provinces look familiar? Why yes, they are the provinces with the highest DPMD rates. Canadian Blood Services has stated that DCD has the greatest potential for future increases in donations.)

Now, France is not the first country to go with presumed consent. They’re not even the first European country to do so. Spain has been presumed-content since 1979. Take a look at the chart above to see where Spain stands. Other presumed-consent countries include Austria, Belgium, Norway, and Italy. Every one of them higher than Canada on the chart. Countries with presumed consent laws generally have higher donation rates.

At this point, I have to point out that there are opposing viewpoints. A lot of noise is being raised about the fact that 150,000 people opted out after only one day of France’s new presumed consent policy, via it’s opt-out website. Of course, France has over 65 million people, and you’d expect there to be an initial surge of refusals, so… yeah, not really impressive numbers there. Evidence elsewhere suggests that only 1–2% of people opt out of presumed consent systems.

One of the points objectors raise is that presumed consent alone does not predict higher DPMP rates. That appears to be true. Colombia is a presumed-consent jurisdiction, yet it is way below Canada on the chart.

Bill Barrable, former CEO of BC Transplant, offers two explanations for why that is the case:

With respect to Barrable’s considerable expertise, I don’t see either of those points as arguments against presumed consent, just arguments that – to quote Barrable – [p]resumed consent is not a panacea for the problems faced in organ donation.

Okay, fine, presumed consent won’t solve every problem with Canada’s patchwork donation infrastructure. But that doesn’t mean it won’t fix some problems. Although presumed consent alone can’t explain the variation in organ donor rates across countries (unsurprising, due to the vastly different levels of health care, mortality rates, cultural differences, and so on), it might be that it could make a huge difference within a single country.

And the evidence is: it does.

There’s negative evidence, too. In 1986, Denmark switched away from presumed consent (to “expressed consent”; basically the same system Canada has now); donation rates fell by 50%.

And it just makes logical sense. A system of presumed consent wouldn’t exist in a vacuum. It would interact with social and cultural mores. Express consent relies on people to take action, and people are lazy and unmotivated when there is no immediate or personal gain, even if they would make the right choice if pressed. Express consent also makes donating a “heroic” act that normal people can beg off. By contrast, presumed consent makes refusing donation the exceptional act, one that people will feel socially obligated to justify.

You probably won’t hear this very often on this blog, but Saskatchewan Premier Brad wall is doing the right thing. In November, Wall started floating the idea of implementing presumed consent in Saskatchewan. The main reason he’s pushing the issue is probably Saskatchewan’s dismal donor rates; they’re the lowest in the country at 8.8 (against the national average 18.2) – there were only 10 or 11 donors in the whole province in 2015. In the bizarro world of Saskatchewan politics, the NDP is actually opposing this proposal. Wall has an uphill struggle if he really wants to pull it off – for example, he’ll have to carefully word the legislation to avoid court challenges.

Which brings us to the most insidious gotcha of organ donation in Canada.

So you’re like me: You’ve registered as an organ donor, you’ve confirmed that the province recognizes your intent, so it’s all good right? Nope. Because it turns out that when you actually die, your family gets to veto your decision.

Yes, really. You can register with your province, you can keep the card in your wallet, you can fill out an end of life directive, you can even tattoo “I want to donate” across your fucking forehead… and all that could amount to nothing if your god-fearing next-of-kin decides you can’t get into Heaven without your pancreas.

This is not just a Canadian problem. Even Spain allows relatives to veto your (presumed) consent, and around 18% do (p. 50).

(As an aside, all of this is also related to another serious problem caused by irrational desire to preserve our bodies after death: we’re running out of cemetery space. Obviously Canada has a ton of space, so the issue isn’t as critical as it is in some other countries, but it is a problem in cities – for example, Calgary. Alternatives being considered are temporary internment (you get dug up and cremated after a year or so), and burying people in layers. Meanwhile, rational alternatives like cremation are becoming greener.)

There is no rational reason to want to keep ownership of your organs after death, or even to keep your body intact at all. There is not going to be any rapture; God will not raising us bodily from our graves and ascending us into Heaven. On the other hand, there are very rational reasons for being identified as an organ donor, and that’s not even to mention the ethical reasons. There are particularly rational reasons for presuming consent for organ donation. And it just makes more sense that our laws are based on reality and reason rather than on ancient custom and religious belief.

So I would urge all humanists and atheists, and all reason-loving Canadians who base their decisions on evidence, to support presumed consent for organ donation. This battle will have to be fought province-by-province, but I suspect that once we get the ball rolling, things will pick up fast. For now, the focus should be on raising awareness and encouraging discussion. We have a lot of archaic, irrational attitudes to overcome.

In addition, I would urge support for the following:

All of these ideas should improve the donation and transplant system across Canada, and save lives.

As for you, personally, dear readers, there are steps you can take yourself.

First, make sure you are a registered organ donor in your province or territory. Until presumed consent becomes the norm, the onus is on us. The Canadian Transplant Society has helpfully set up a page with links to all provincial and territorial organ donor registries.

Second, consider filling out a “living will” – and advance healthcare directive. In it you should specify not only that you wish to donate your organs, but also that you do not want this wish to be overridden by family members. You may also want to include provisions about medical assistance in dying, to allow you a merciful death in the event that you are unable to consent at the time. I understand that this is not pleasant stuff to consider, but it’s better to consider these things and be ready when there’s a crisis than to have to figure it out – or worse, force your loved ones to figure it out – in the middle of an emotionally devastating crisis. CTS provides a simple form focused on organ donation. Dying With Dignity Canada provides much more advance care planning kits for each province and territory.

These are tough issues to consider, but we can’t expect to denounce beliefs in gods and afterlives without confronting issues of death and dying. We should be ready to face these things with maturity and, yes, of course, with reason. As atheists, humanists, and freethinkers, organ donation should be a no-brainer, and presumed consent seems to be the logical, practical way to make that happen on a large scale. While it may not solve all the issues with organ and tissue donation in Canada, the evidence suggests that it will help. Even if it only helps to save one extra life a year, that would be an enormous victory.