Poll numbers in Ontario are up! No, not for the Ontario Liberals – they’re in the basement and digging (say hi to Justin Trudeau while you’re down there!). I’m talking about public support for ending the publicly funded, separate Catholic school system.

In fact, here’s what the founder of Forum Research, Dr. Lorne Bozinoff, had to say about it:

We have tracked this issue for several years, and opposition to funding is always at about one half, while support is nearer one third. If it were ever put to a public referendum, Catholic school funding would lose, fair and square.

And the trends over time back him up. 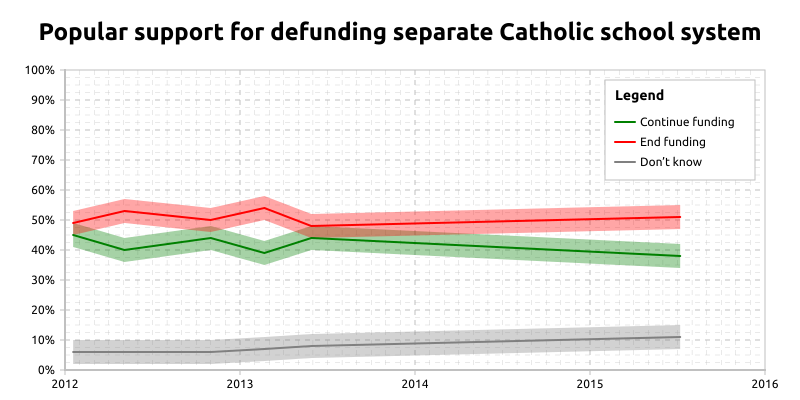 Support for defunding Ontario Catholic school board over time

But what really are the chances of it happening any time soon?

I’ve written before about why our broken electoral system makes it hard for politicians to support secular endeavours, such as defunding Catholic schools. Still, it’s likely going to be more than 3 years before the next Ontario election, so it’s far too early to predict what might be the issues then. In the meantime, though, we’re stuck with Kathleen Wynne.

Full disclosure here: I was an enormously strong supporter of Wynne when she was first elected leader of the Ontario Liberals. I had no preference when I started watching the 2013 Ontario Liberal leadership convention, but her speech blew me away. I sat on the edge of my seat as she lost the first two ballots by increasing margins, then cheered as she came back and won the third ballot – and the leadership race – handily. First gay premier in Canada (and at the time a full half of premiers across Canada were women – this was before Pauline Marois, Kathy Dunderdale, and Alison Redford flamed out so spectacularly) with a majority mandate after the 2014 election. At the time there were signs of the abysmal ethical failure she would eventually become, but it was easy to find excuses – for example, the gas plant scandal was McGuinty’s fault, and she only inherited the mess.

We know now that it’s not worth wasting our time trying to reach out to Kathleen Wynne to do the right thing. She has made it clear that she is determined to ignore both the will of the population she is supposed to represent, and the condemnations from human rights groups – including even the United Nations – for the sake of pandering to the religious vote.

So to hell with the Ontario Liberals. Let’s look to the other parties.

There is some small hope there. If the other parties sense the popular pressure behind the issue, they might decide to champion the cause. If they do, that might force Wynne’s hand – after all, there is majority support for defunding, and that’s without any party waving a flag about the issue. And if Wynne is determined to dig in on the point, the other party or parties might just decide to make it an election issue for 2018.

So let’s look at our options.

Unsurprisingly, we can rule the Conservatives out. I know, shock of shocks, right? Not only does there seem to be little motivation for them to take up our flag in this cause – because Conservative supporters want to continue funding – this is a party that has actually managed to make Wynne look progressive on the issue. In fact, in 2008, then-leader (and now mayor of Toronto) John Tory wanted to extend funding… to all religions!

So to hell with the Ontario PCs. Who’s next?

Well the remaining two major parties are the Ontario Greens and the Ontario NDP. The Greens are notable for being the only major party to actually put the issue on their platform and come out in favour of defunding. Good for them!

Now the bad news. They support chiropractic, naturopathy, acupuncture, … and homeopathy. Now, in their defence, just a month or two ago they had their Annual General Meeting and Policy Conference, where they passed a resolution to ditch that shit. However, it remains in their policy book, and even if/when it gets removed, they haven’t exactly been beating the public drum about giving up on peddling woo in favour of science-based medicine.

But even if they’re no longer into pushing magical water memory, let’s face facts. They’re never going to get elected. They can’t even manage to win a single seat. Even party leader Mike Schreiner couldn’t manage better than third place in his riding in 2014. (Narrowly beating out James Gordon of all people.)

Which brings us to the NDP.

Right now thanks to the momentum from the startling win in Alberta, the NDP looks like it has the best chance of winning the next election, and its star is still rising. There’s still a lot of time to fuck things up before October 2018, but if we’re looking for the party that has the best chance of either pressuring Wynne’s Liberals into doing the right thing, or ultimately doing it themselves, the NDP has the numbers that suggest they should be our choice.

Even more intriguing, after Green supporters, NDP supporters are the second most supportive political bloc when it comes to defunding Catholic schools, with 56% supporting defunding and 37% opposing. In other words, this is something the NDP’s supporters want.

So we should throw our support behind the NDP right?

Ontario NDP leader Andrea Horwath has played every card in the deck to stymie the efforts to do what’s right. She has actually stepped in and violated the NDP policy against whipping the vote to specifically order her MPPs not to look into merging the school systems. Lolwut?

Believe it or not, there is still a very faint glimmer of hope. The reason Horwath is so freaked out about the separate schools merger issue is precisely because her own MPPs keep bringing it up. And of course, their supporters want it (not to mention the general public).

The roadblock here is Horwath, who is Catholic. If she weren’t the party leader, there would be a very real shot at not only getting this issue on the table, but of actually getting it resolved. Unfortunately, at her last leadership review in 2012 she got strong (76%) support. On the other hand, that was before she fucked up with the 2014 budget, and then flubbed the 2014 election. On the other-other hand, there’s no way the NDP would switch horses at this point, even when the current one is running in the wrong direction.

So there it is, sadly. Unless something really major comes up, there seems little hope for Ontario’s elected government to actually comply with the will of its population – never mind the condemnations from human rights groups and the plain and simple economic sense of merging. And it would have to be something really major, because neither scandal over Gay-Straight Alliances nor the Truth and Reconciliation Commission report have managed to have any effect. We don’t even really have a party we can push on the issue.

I’d be open to hear anyone’s thoughts on a plausible strategy for actually making this happen. But from where I’m sitting, this seems to be a dead issue for the time being at least.

11 thoughts on “Yet another survey shows majority support for defunding Ontario’s Catholic school system, but does it matter?”