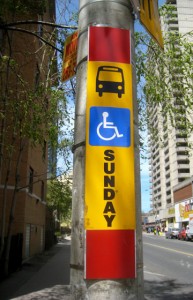 an attempt to rationalize service, but also an acknowledgement of Toronto’s changing religious landscape.

The TTC board decision made the decision to eliminate Sunday to improve “safety and service for all TTC users on all routes.” However, there are other reasons: the TTC has finally recognized that “Toronto the Good,” is no longer just a “City of Churches,” but a city of temples, mosques and other places of worship that do not have the privilege of special transit stops.

At least one church going Christian is going to complain to his city councillor because he just doesn’t get it:

“I understand that they’re saying others don’t have it, but does that mean no one should have it?”

That’s right, the days of granting special privileges to Christians are over, at least for the TTC. As the transit’s spokesperson Brad Ross points out,

“We are a secular society and times have changed.”

The TTC’s elimination of Sunday transit stops is one small step in the recognition that religion should not dominate the public sphere.

One thought on “The TTC Goes Secular”