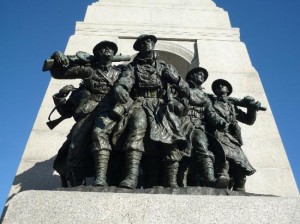 When the dust settled on the terrible attack on parliament last month, we noted with frustration the irksome phrase “no atheists in foxholes” appeared in a speech, otherwise moving in its call for unity in government, made by Green Party leader Elizabeth May shortly afterward. Its appearance early in an address that went on to warn against making (implied religious) assumptions is a sad and familiar irony. Her use of the phrase as analogous to the dissolving of partisanship, through a shared experience of mortal fear, into an implied “natural” state of common humanity is revealing, and particularly troubling.

For many this phrase is a harmless idiom, providing a convenient shorthand to convey the experience of having our armour fall at our feet – our human core exposed – at the threat of imminent death or calamity. Nontheists of all stripes, however, instantly recognize our implied exclusion from this shared human experience. As atheists, we are seen as standing a-positionally to some Thing (God); the threat of death is meant to strip us of our petty transgression, uniting us with our natural state: that of worship. Even as mere idiom, it shares the unfortunate trait of others in English, which convey meaning with confused inaccuracy: “I could care less.” “Quantum leap.” Because atheists, (appalled by “There just has to be something more!” – all this is not enough for you?!), refrain from curtailing the study of our universe in pursuit of eternal reward, in favour of learning all there is to learn, and revelling in the privilege of an evolved mind to ponder all its wonders. When we cry out at death – just like you – we taste the bitter sweetness of the leaving.

As this note is penned on Remembrance Day, in a country where veterans from every religion – and none – suffer painful neglect, and new recruits prepare for deployment, we’re reminded that, if diaries of frontline nurses are any indication, dying soldiers more often call for their mothers. It’s only natural. There are no orphans in foxholes. Please say that instead, next time, Ms. May, and repeat it, for the benefit of your fellow MPs, until it becomes shorthand for the shared responsibility we have for one another, regardless of piety, in times of duress. Let’s all say it together, until it sticks.

8 thoughts on “No Atheists in Foxholes? I could care less.”