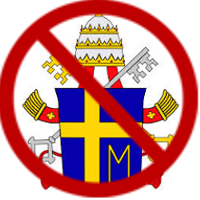 The first Karol Wojtyła (aka Pope John Paul II) day in Ontario was April 2, 2014. On March 28, I noted that Ontario Bill 72, Pope John Paul II Day Act, 2014 “was passed in what appears to be unseemly haste.” The Bill was never discussed in committee, so there was no opportunity for public debate.

A similar bill, Bill C-266: An Act to establish Pope John Paul II Day in Canada, passed its third and final reading in Parliament and was referred to the Senate. When the Senate completed the second reading on April 30, Bill C-266 was sent to committee for debate.

The Canadian Secular Alliance asks the Senate Standing Committee on Human Rights to signal its commitment to the principles of human rights for all, regardless of religion, sexual orientation, and gender by refusing to pass C-266: An Act to Establish Pope John Paul II Day.

The complete submission is available on the Canadian Secular Alliance website.

3 thoughts on “Please, No JPII Day in Canada”