If you ever wonder why things in the world are so messed up, it’s because God is spending all His time watching Matthew McConaughey’s career and providing him all those opportunities, as revealed in McConaughey’s Oscar acceptance speech. McConaughey says he needs three things in his life, the first being God who “has graced my life with opportunities that I know are not of my hand or any other human hand”. That sounds reasonable. It couldn’t have been all those people who helped along the way: fellow actors, directors, script writers. After all, according to McConaughey, God showed him that “it’s a scientific fact that gratitude reciprocates.”

CBSNews parses the entire speech for you here and fear not, God noticed and was pleased 😀 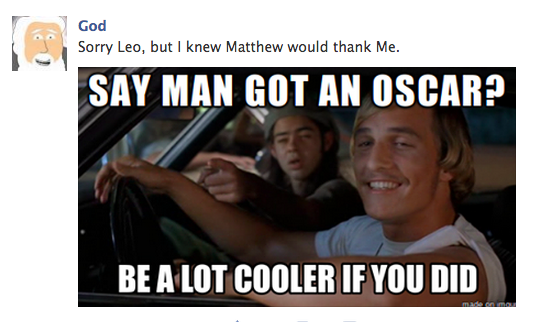