Every year the International Humanist and Ethical Union publishes the Freedom of Thought Report, a comprehensive report on systemic discrimination against the nonreligious around the world.

This year’s Report had a new feature: a ranking system. What they’ve done is taken the violation levels from the previous reports – “Free and Equal”, “Mostly Satisfactory”, “Systemic Discrimination”, “Severe Discrimination”, and “Grave Violations” – and assigned a numeric score for each level, then tallied up the number of violation scores for each country, and ranked them. Canada has 8 “Systemic Discrimination” violations at 9 points each, and 5 at “Mostly Satisfactory” at 2 points each, for a total of (8 × 9 + 5 × 2 =) 82 points, which places it at 124th, tied with Cyprus (more on that in a bit).

This ranking might seem a bit alarming to Canadians, especially when compared to the US ranking – because comparing ourselves to the US is a national pastime. The US is tied for 8th place with Norway, with only 3 “Mostly Satisfactory” violations.

Every year Canadians object to the report’s conclusions on the basis of the obvious and undeniable fact that it’s so much better in Canada than it is in the US for the nonreligious, so something must be wrong with the report’s methods. Every year the report’s authors and I have to explain the same reasoning (see the report’s editorial introduction):

There are also a few errors – to be expected with a report of this magnitude and scope created by an organization with as few resources as the IHEU. Cyprus, for example: while their score is correct, they should have a red box in the “freedom of expression” strand.

So the method of the report makes sense, broadly speaking, but does Canada really deserve its score? 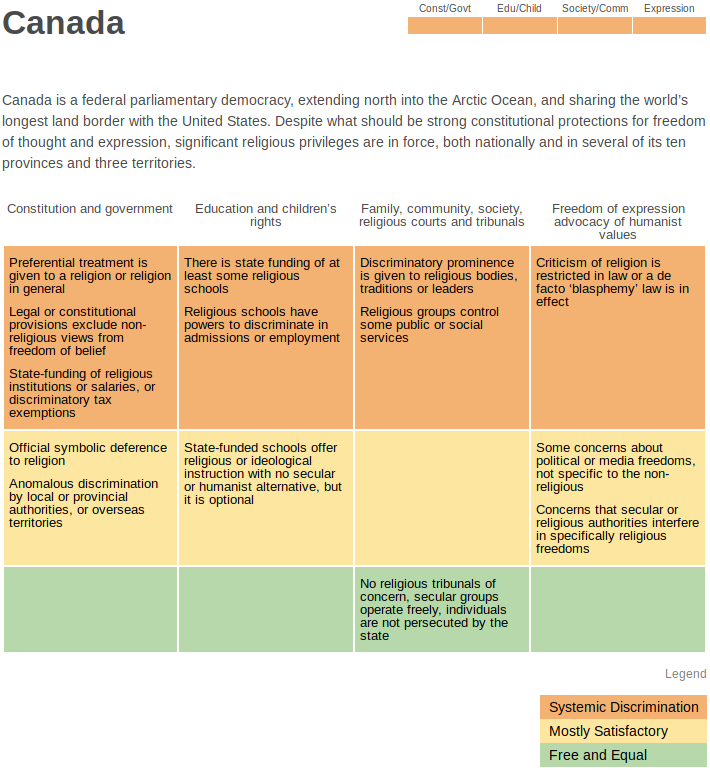 The main culprit in Canada’s embarrassing score is the separate – that is, Catholic – school systems that still exist in three provinces and the territories. Not only do these burn us for being publicly-funded religious school systems, they are also allowed to discriminate in admissions and hiring. Ending these separate school systems would bump us up at least 10 ranks right away.

Other major culprits include:

It does kinda suck to see Canada so low down in the rankings – especially for me personally, considering all the years I’ve put into making Canada better for nonbelievers. But I’m a glass-half-full kinda guy, so I prefer to see this as an opportunity for improvement. It’s almost like the gamification of SHAFT activism!

We’re already close to eliminating the blasphemy law. There are also good reasons to think that ending the separate school systems may be achievable too. (At least in Alberta and Saskatchewan. Ontario is pretty much a write-off until the Ford government ends.) Both the charity laws and the “conscientious objection” options for medical providers are being reviewed, and though we can presume those projects will come to a grinding halt for an election year, there is good cause to hope they might be dealt with after.

So I see this poor showing as a challenge. Improving our score could serve as a road map for improving the lot of nonbelievers in Canada in general, and making Canada an even better secular country.