Rights should never be put to a popular vote, but one of the justifications for Québec’s Bill 62 is that a majority of Québécois wanted it. Is that true? How does the rest of Canada feel?

Last Friday, the Angus Reid Institute released the results of a survey asking the question. The top line result is unsurprising: 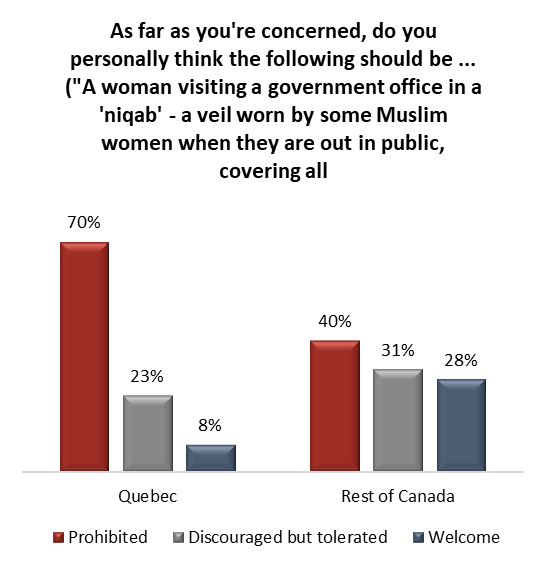 I understand the equivocation between “welcome” and “discouraged but tolerated”, but the correct answer is “welcome”. If it were me, personally, or a private business, “discouraged but tolerated” would be perfectly fine. But a government office should not be moralizing. Unless there is an actual issue with the garment – a health and safety issue, or someone else’s rights and freedoms being violated – the government shouldn’t be dictating morality to the population.

The problem in Québec is illustrated pretty starkly in that chart. But the rest of Canada isn’t so bad. Not great, mind you; ~40% thinking the government should dictate morality is pretty bad. But it’s not as bad as it could be. ~60% correctly think the government shouldn’t ban clothing most Canadians find distasteful. Unfortunately, half of them still think it should be “discouraged”, though one wonders how that might work in practice.

As always, let’s dig a little deeper into the break down of these numbers.

The primary source of Canada-wide intolerance is, unsurprisingly, Québec. Québec alone pushes the “niqabs should be banned” numbers up 8 percentage points. Outside of Québec, no other province is anywhere near as intolerant… except Saskatchewan.

Alberta also makes a pretty strong bigot showing, but the rest of Canada is pretty much all in line with the overall numbers.

Once again, there is an exception: Manitoba. Manitoba is the only province that has a majority that give the correct answer. Well done, Manitoba! I take back all those times I called you “the forgotten province”.

But the chart above shows that, other than Québec, the real story of this intolerance in Canada isn’t regional. So what is actually driving the intolerance?

If you’ve read my previous survey deconstructions, you’re probably aware that there are some trends that show up over and over. Generally speaking, intolerance, bigotry, hate, and ignorance are associated with: being older, being poorer, being less educated, and being more conservative. This survey doesn’t include information about education or income, but it does include information about age and political affiliation. So are there any surprises. 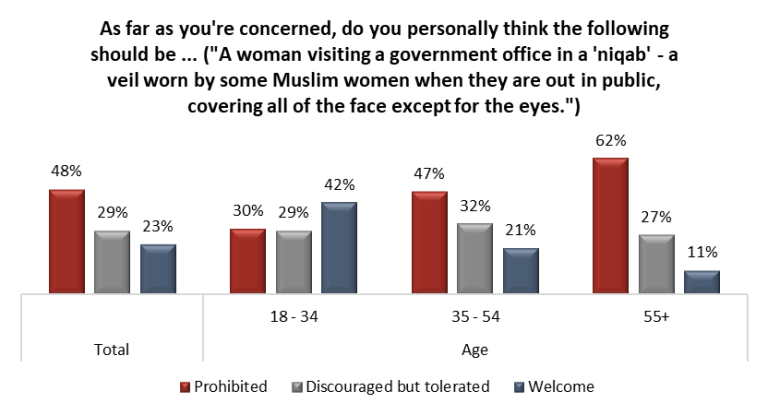 As expected, it is older Canadians who are less tolerant, and who are most comfortable with the government legislating morality. Significantly so. In fact, the 18–34 group is not only twice as likely to be tolerant as any other age group, it also shows the highest level of tolerance of any group in the entire survey – even higher than Manitoba.

Basically, all of the tolerance in Canada is coming from younger Canadians. That’s damned impressive, and very uplifting. As I frequently say writing up these surveys: the future in Canada really is bright.

So most of the tolerance shown in the overall results is thanks to younger Canadians and Manitobans. And most of the intolerance comes from Québec, the 55+ group, and – to a lesser extent – Saskatchewan and Alberta. Right?

Well, no. There’s one major contributor that hasn’t been mentioned yet: 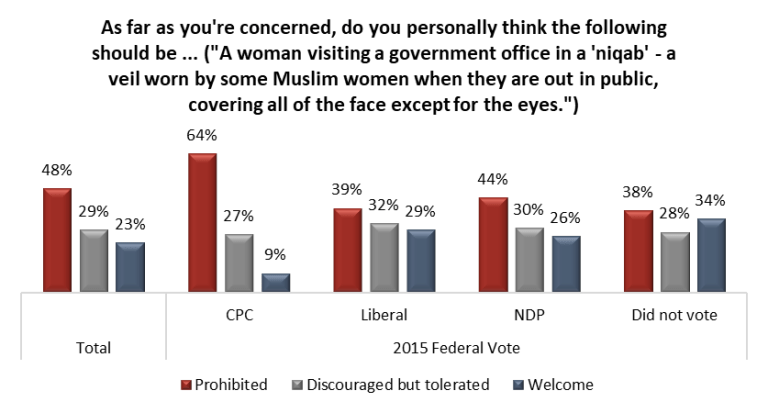 70% would support such a law. That’s disturbing. 60% think niqabs should not be prohibited, but because this is an issue that doesn’t affect them, many of those people apparently prefer to side with the government even when they think the government is wrong. Put that way, it’s not surprising; Canadians are generally loathe to rock the boat or go against the flow. But it’s still disappointing.

This data is not broken down by age or political leaning, but it is broken down by region. There’s nothing really interesting to see there, though – the results are pretty consistent across provinces (remember that this data excludes Québec). However, BC is a bit of an outlier: BCers strongly oppose the law at a rate of 25%… that’s more than 10% higher than the national average. That’s the only result that deviates from the national average in any answer by more than 5%. Not bad, BC… but still, 41% of BCers strongly support such a law, so BC doesn’t get a cookie for standing out like Manitoba did.

The most important thing to remember when looking at all of these results is that fundamental rights and freedoms should never be put to a popular vote. That’s the whole point of a bill of rights, like the Charter; it enshrines rights and freedoms and places them out of the reach of popular opinion.

I get that most Canadians find the niqab and burqa offensive. I don’t like them either. I am vigorously opposed to purity/chastity garments, and to body/sex shaming in general.

But somewhere in the “debate” over banning the niqab/burqa, many Canadians have forgotten what it means to live in a free country. There is no freedom to not be offended – ironically, something that many veil-ban supporters are fond of saying on any other issue besides this one. Living in a free society means that you will inevitably be confronted with someone doing something you find disgusting or abhorrent… but so long as it is not harming anyone or anything – so long as it is not violating anyone else’s rights or freedoms – living in a free society means we have to tolerate such things.

However, “tolerate” does not mean “welcome”. We are always free to protest things we find disgusting or abhorrent, and always free to challenge them. A free society does not mean a tranquil society; quite the opposite, in fact. A truly free society will be vibrant and roiling with vigorous debate. The only way a society can be perfectly tranquil is if it is repressed… or all dead or doped into quiescence.

The results of this survey tell us what we really already knew: Canadians are generally profoundly ignorant about rights and freedoms, and the role of the government in protecting them. We have a lot of educating to do.