There’s a new twist in the burqini drama in France, as the highest court in the land, the Council of State, rules against the ban.

The court’s ruling explains plainly that you can’t take away people’s freedoms on a whim; there needs to be a proven risk to public order. Duh, right? Well, keep in mind that a lower court upheld the ban a week ago.

Since then, things unsurprisingly only went further downhill. One particular incident in Nice went viral, as a woman who was quietly sunbathing was surrounded by four, armed policemen in bulletproof vests and forced to strip right there on the beach. (For the record, the law did not say violators would be stripped – that would have been far beyond the pale.)

In another incident, witnessed by a journalist and filmed by an onlooker, a woman who wasn’t even wearing a burqini – just leggings, a T-shirt, and a hijab* – was accosted by three armed officers, one whom threatened her with pepper spray, in front of her children, while onlookers jeered and told her to get out of France. (*The reason being that the burqini bans don’t specifically ban burqinis per se, but rather couch the ban in faux neutral language about “ostentatious” religious beachwear.) 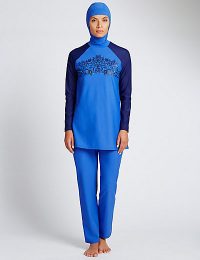 And in the “this should surprise no one” department: The actual fallout of the ban has been to make the burqini more popular, and turn it into a symbol of freedom. Sigh; fucking dumbass bigots, this one’s on you.

What’s really brought me encouragement throughout this debacle has been the overwhelming response in support of tolerance and liberty. I suppose I’ve spent too much time in the little bubble that is Canadian secularism, humanism, atheism, and freethought I’ve written before about the serious problem we have in Canadian SHAFT groups. Bigotry and intolerance is rampant, particularly in the form of Islamophobia. It’s easy to generalize that intolerance, and think that it’s a universal problem.

But the world proved itself better than my expectations. Organizations worldwide lined up to condemn the ban: the International Humanist and Ethical Union, Human Rights Watch, Amnesty International, even UN Secretary General Ban Ki-moon called it fucking stupid (not a direct quote, unfortunately). And even better, when each of these organizations condemned the ban, they did so without pandering to the religious ideology behind it.

So, what now? Do the bans go away?

You see, for those who don’t understand how these things work, when a court strikes down a law made by some municipality, they strike down just that specific municipality’s law. In this case, the ban was struck down in Villeneuve-Loubet. All the identical laws in all the other municipalities – and there are apparently over 30 now – they all still stand.

Of course, the logic is that once it’s been struck down in one municipality it’s obviously going to be struck down in every other municipality that tries it. But there’s nothing stopping a stubborn municipality from keeping the law even though they know it’s unconstitutional, until they’re actually forced by a court to drop it. (We saw the same thing happen in Canada, with our public prayer ruling.)

Further complicating things is the fact that the ban hasn’t actually been struck down. It’s been suspended. There will be further hearings before a final decision is made. This is the Court’s way of saying “while we haven’t considered it in depth, a cursory glance shows it to be fucking stupid, so we’re putting a stop to it immediately; we’ll have a proper discussion later and decide whether or not to shut it down permanently”.

Nevertheless, the Court’s language in its suspension is pretty devastating. And while the ban is technically only suspended in Villeneuve-Loubet, that’s only because it was the first case to make it to the highest court, and it seems pretty obvious that all the similar bans would face the same fate. So… what now? Are the bigots admitting defeat, listening to reason, and agreeing to acknowledge the rule of law?

Just as happened in Canada when public prayer was ruled unconstitutional, several municipalities have vowed to defy the Court and keep their bans in place. Nice is one such place, but another that deserves mention is Sisco, in Corsica. Why is Sisco particularly interesting? Because Sisco was the site of a riot that broke out after locals harassed women in burqinis, that escalated to hatchets and harpoons and burning cars, leaving five people injured.

Even more depressing, national-level politicians are doubling down on the ignorant rhetoric. Prime Minister Manuel Valls has said the Court’s decision doesn’t exhaust the debate, and that old rat Nicolas Sarkozy has scuttled out of the woodwork, and promised a nationwide ban if he’s elected next year.

I don’t hold out much hope that striking down the bans will make the bigots stop and actually think reasonably about their positions. But maybe having all the world’s decent people rise up and deliver a solid spank-down to the ideology will have the effect of branding it with the mark of shame, and driving it out of generally acceptable political discourse.