These are very good recommendations, and they have been generally received favourably by reasonable people. (Unsurprisingly, religious organizations have objected.)

But the Angus Reid Institute recently released a survey on Canadian attitudes to physician-assisted dying, and it turns out that while Canadians are broadly (90%, according to the ARI survey) supportive of the idea, they are very confused about the details and implications.

This is a big and complicated issue, and one that keenly interests Canadians, so I’m going to split my coverage into two posts. In the first post (this post), I’m going to cover the stuff that the survey respondents get right, which is – happily – most of it (making some allowance for unclear and misleading questions). In Part 2, I’ll dig into the stuff they got very wrong.

Naturally, religion – while not mentioned in detail in the survey results – was a factor. Out of the 90% who support legalizing physician-assisted dying, 12% would prefer no restrictions at all. Of the remaining 79%, 39% prefer limited regulations while 40% want strict regulations, and guess how those two groups break down with respect to religion: 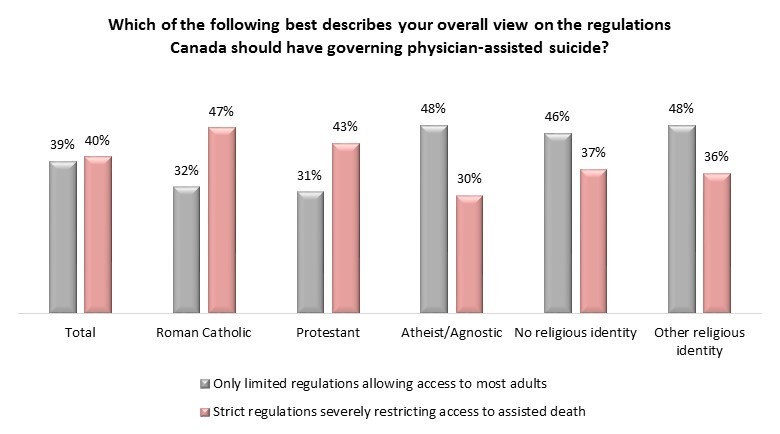 Putting religion aside, there are some other peculiar results in the survey. For example, there is the matter of psychological suffering. 76% say a person with a terminal prognosis of six months maximum should be allowed medical assistance in dying, and 73% say the same for a person who is a great deal of pain. However, a whopping 78% would deny physician-assisted dying when a person is suffering psychologically (but doesn’t have a terminal illness). 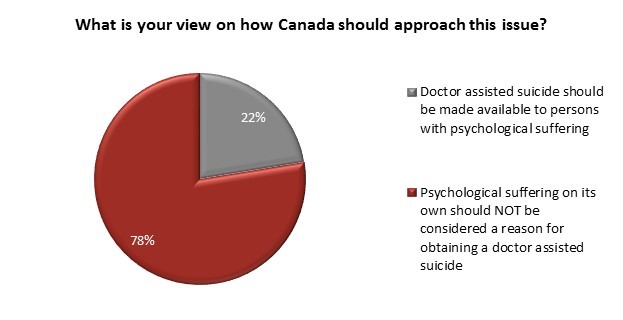 I’m speculating, but I suspect that a large part of the reason for this disparity has to do with the way the question was asked:

Note that the only example of psychological suffering given is depression. But of course, misunderstanding of depression as a medical issue is widespread. Most Canadians think depression is just a matter of being ‘down in the dumps’ and can be cured by ‘cheering up’. I suspect the survey result is more due to ignorance about depression than to an actual Canadian desire to leave people suffering psychologically to just ‘suck it up and bear it’.

Canadians generally support (66%) the idea of ‘in advance’ requests for physician-assisted dying in cases where the patient is expected to lose capacity to consent (such as with dementia). However, they overwhelmingly (89%) support ignoring the request made by the patient when they were of sound mind if they later – while suffering from dementia – express reservations.

It’s hard to disagree with that result, because the major factor should be whether the person is still competent enough to make that choice after they begin to succumb to dementia, but the question itself doesn’t explicitly mention that. If you assume the patient is still competent, then of course they should have the right to overturn their previous decision. Things may be different if the patient is no longer competent, but the question doesn’t explicitly say that’s the case, and it doesn’t seem right to blindly assume it.

I was surprised to see that a majority (58%) of Canadians support extending the right to die to ‘mature minors’ – people under 18 years of age who are judged competent. Support is quite a bit lower than for adults, which is to be expected. The survey also asked about whether ‘mature minors’ should be allowed physician-assisted suicide for cases of psychological suffering, but as with adults the opinion was strongly against (88%), which is understandable for the same reasons.

The ARI survey covers some other questions, such as how applications to die should be reviewed, and whether the right-to-die issue is a primarily medical issue, primarily moral, or both. It also covers some areas that the PDAM report didn’t, such as wait times and whether it’s okay to euthanize severely disabled newborns. There’s a large section on reasons for wanting to die, and how the survey respondents felt about the legitimacy of each one… not that any of it is really relevant – because in the Committee’s recommendation, determining whether a patient is eligible for physician-assisted suicide is a matter of determining whether they are suffering enough, and whether they are competent to request it – but it’s an interesting look at what people are thinking. It’s worth a read if you’re interested in assisted dying in Canada.