In Part 1, I covered the recommendations of the federal Parliament’s Special Joint Committee on Physician-Assisted Dying (PDAM) that the respondents of an Angus Reid Institute survey mostly agreed with. Now I’m going to talk about the main issue they disagreed with, and why the survey respondents are wrong.

PDAM made 21 recommendations for how the federal government should go about implementing a fair and reasonable physician-assisted dying infrastructure. Respondents in the ARI survey agreed with most of them, and on most of those they didn’t, there are extenuating circumstances – either ignorance about the topic, or poorly-worded questions. But there was one recommendation that respondents had a real problem with:

But let’s get the second recommendation – recommendation 10 – out of the way before we dig into the first. The survey’s question 9 was worded like this:

[IF DOCTORS SHOULD BE REQUIRED TO REFER:]

Q9b. Instead of requiring doctors to make a referral, would you support the provincial government maintaining a 1-800 call line or website which individuals could access to find doctors who participate in this procedure.

Now I’m baffled as to why it was necessary to specifically mention lethal injection in the ‘required to refer’ option of the first part. Regardless, 72% said that a doctor should be required to refer. Not bad at all. Those 72% were split roughly half-and-half on whether the reference had to be directly to another doctor, or whether it could simply be to some kind of 1–800 hotline or website (51%-49% in favour of the hotline/website).

Readers of this blog will probably argue that it isn’t really ideal that doctors can refuse at all; if they want to practice medicine, they shouldn’t be allowed to pick and choose what medical treatments they’re going to use – they should follow provincial/federal health practices and standards whether they damn well like it or not. Perhaps, but the reality is that doctors have Charter rights, too, and the right to freedom of conscience and religion is among them. Requiring referral for a procedure a doctor can’t do for religious or conscientious reasons is a reasonable compromise.

So now we come to the problematic questions: questions 10 and 11. Both questions are basically identical, except one refers to hospitals, the other to nursing homes. The order between the two was randomized (so some people got the nursing home question first, others got the hospital one first), but the canonical order (used for the results) was hospitals then nursing homes, so I’ll cover them in that order.

Q10. Another issue concerns the position of Catholic hospitals that operate in cities and towns across Canada. Catholic hospitals have stated, on moral and ethical grounds, that they will not allow doctor assisted suicide in their facilities. Which of the following is closest to your opinion:

[IF Catholic hospitals should be required:]

Q10b. Would you support withdrawing public funding from Catholic hospitals that refuse to allow doctor assisted suicides on their premises?

So the results to the first part were:

But it gets worse. While results by religion were not included in the published data, results by province, gender, age, education, and household income were… and in every single category, the majority voted for allowing Catholic hospitals to refuse to provide the service. It ranged from as low as 51% for males aged 35–54, to as high as 80% for people in Saskatchewan.

With one exception: Québec.

But before you Québec fans start cheering… you might want to check the results of the second part of the question.

Those who said Catholic hospitals should be required to provide assisted dying services were then asked what should be done for those Catholic hospitals that refuse to do so. A 64% majority overall supported withdrawing government funding from non-compliant Catholic hospitals, and once again, this was true in every single category. It ranged from 58% for 55+ females up to 89% for Alberta.

And once again, the lone exception was Québec. 51% of Québec would not withdraw government funding from Catholic hospitals that refused to provide assisted dying services. 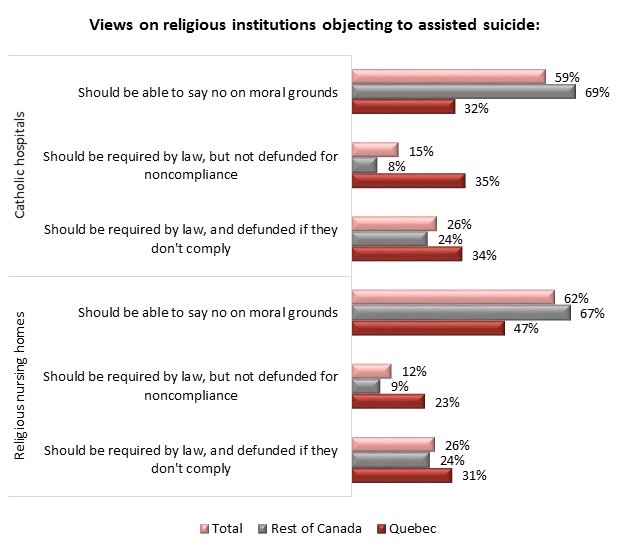 The situation is pretty much exactly the same for nursing homes, except this time Québec agreed (58%) that non-compliant nursing homes should be defunded.

No, it’s not a matter of opinion. If it appears so, that’s only because you’re missing a somewhat obvious, but vital point.

People have religious beliefs; institutions do not have religious beliefs, and it is absurd to pretend they do. It’s not as if having an abortion in the surgical theatre of a Catholic hospital will prevent that hospital’s soul from ascending to Heaven after it dies. I’ve never heard of a hospital being excommunicated because it allowed abortions. I’d be quite concerned if a hospital managed to uproot itself and fit into the nearest church for mass on Sundays, and I’d be quite fascinated to hear what sins a hospital could confess to.

People who think hospitals should be allowed to claim any moral exemptions are profoundly confused. They are bamboozled by language: a ‘Catholic hospital’ is not ‘Catholic’ in the same way that a ‘Catholic nun’ is. A ‘Catholic hospital’ is just a corporation whose board of directors presumably happens to consist predominantly of Catholic members, who want to impose their theology on the corporation’s employees and customers.

Put that way, it kinda makes the spin of ‘Catholic hospitals refusing service on moral grounds’ far less appealing. It reveals the truth behind such spin: This is not an analogous situation to a religious person being forced to act against their faith… it is a situation where religious people are imposing their faith on others.

If a patient in a Catholic hospital wants assisted dying services, and their attending doctor wants to provide them, then what right does a bunch of religious sots on that hospital’s board of directors have to interfere with the beliefs of that doctor and patient? No one is asking any of the directors to be involved.

If a Catholic doctor at a secular hospital can refuse to provide assisted dying services on moral grounds, and the secular board of that hospital cannot intervene, then it should also be true that the Catholic board of a Catholic hospital cannot intervene when an atheist doctor decides that it’s what’s best for their patient. Giving precedence to the moral concerns of Catholic doctors working for secular institutions, while forcing secular doctors to give precedence to the moral concerns of the directorship of Catholic institutions, is flat-out bullshit.

So the Committee got it exactly right. Doctors and other health care practitioners should have the right to refuse to provide assisted dying services (but they must refer the patient), but health care institutions should not.

Québec got it right, too, but Québec screwed up the second part of the equation: how to handle institutions that thumb their noses at the provincial or federal health care guidelines. I frankly can’t see the logic in not threatening such institutions with a loss of public funding. I’d be curious to hear an argument for why we should insist on Catholic hospitals providing assisted dying services, but continue feeding them public money if they refuse.

By and large, it looks like the Canadian public is in agreement with the Parliamentary Committee’s recommendations for assisted dying. Those few areas of disagreement appear to be entirely based on a lack of education, such as about the medical nature of depression. This seems to be true for the issues raised in this post as well. I suspect if we make an effort to clarify – whenever it comes up – that hospitals are institutions, not people, and institutions do not have religious beliefs, we can chip away at the majority who think hospitals can make moral or conscientious objections. This isn’t just important for physician-assisted dying – it has implications for other health issues that religious groups like to make a ‘moral’ fuss over, such as abortion.

9 thoughts on “Survey on the Parliamentary Committee’s Physician-Assisted Dying recommendations, part 2: what the survey respondents got wrong”