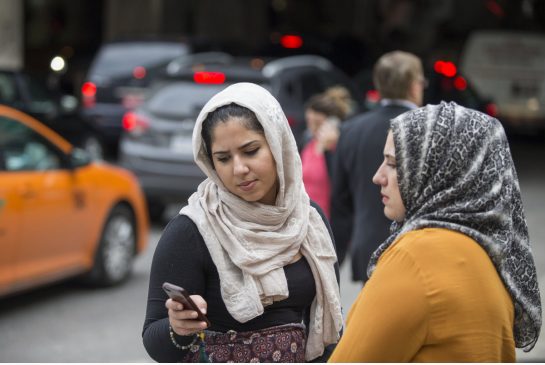 The source for the photo above is a Toronto Star editorial that maintains that “Ontario Should Set Up Long-Promised Anti-Racism Secretariat.” While the picture above may be evidence for my own belief that young people and many adults cannot have a face-to-face conversation without the help of a cell phone, it is not evidence that Canadians are becoming more racist.

in November, alone, the only mosque in Peterborough was firebombed, windows were smashed at a temple in Kitchener, and two women in hijabs were harassed on the TTC.

What the Star fails to mention is another November event:

On the evening of 13 November 2015, a series of coordinated terrorist attacks occurred in Paris, the capital of France, and its northern suburb, Saint-Denis. . . . The attackers killed 130 people,including 89 at the Bataclan theatre, where they took hostages before engaging in a stand-off with police. There were 368 people who were wounded, 80–99 seriously so. . . . The Islamic State of Iraq and the Levant (ISIL) claimed responsibility for the attacks.

If the ignorant and criminal perpetrators of the “recent events” in Ontario were motivated by the events in Paris, and there is evidence that they were, then the perpetrators were particularly criminally stupid because at least one perpetrator didn’t know the difference between a mosque and a Hindu temple.

Worse still, the Toronto Star doesn’t know the difference between racism and religious bigotry. Unfortunately, bigotry, defined as “intolerance towards those who hold different opinions from oneself,” is a pejorative and in the minds of many, is an attitude that needs to be combated. However, intolerance toward the damage religion inflicts on society is an attitude that should be encouraged.

Religious belief is not an opinion, it is a powerful motivation for criminal behaviour. It has become a cliche to say that not all Catholic priests abuse children or that not all Muslims are responsible for bombing buildings. What is not a cliche is to say that the many who belong to these and other religious groups are fully responsible for the crimes of the few within their group. Furthermore, the state enables the “moderate” members of these criminal institutions to remain members. The Canadian municipal, provincial and federal governments allow religious Canadians to display the symbols of their loyalty to repressive and pernicious religious institutions anywhere and anytime they please.

11 thoughts on “A Case for Religious Intolerance”