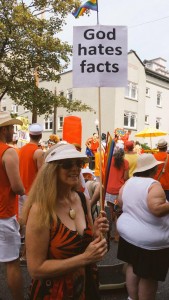 The 37th annual Pride Parade, which took place yesterday, was particularly significant because

organizers asked groups and politicians participating in the event to sign a Trans Equity Now pledge.

The BC Liberals refused to sign the pledge so the provincial party wasn’t represented, but Justin Trudeau, who “had already committed to march in Vancouver’s Pride parade,” began his election campaign by joining the hundreds of thousands of people who attended Vancouver Pride 2015.

The BC Humanist Association attended the parade, and Ian Bushfield, who has returned to Vancouver from the UK, makes an appearance at 1:42 in a BC CTV News video of the parade.