Thursday’s March for Life rally on Parliament Hill attracted anywhere from 8,000 to 25,000 people. As the name of the rally suggests, most of the people were marching “for life” and Jesus.  However, Secular Ontario and the Humanist Association of Ottawa attended the rally to draw attention to the waste of tax dollars spent on Ontario publicly-funded Catholic schools.

On Tuesday, SO and HAO distributed this press release:

Every year Catholic School Boards use your tax dollars to bus thousands of kids to the annual March For Life, a Pro-Life event on Parliament Hill. While Ontario Catholic school boards and students have the right to free expression, members of Secular Ontario and the Humanist Association of Ottawa are getting together on May 14 in protest against Catholic school boards’ misuse of Ontario tax dollars and to inform high school students of their right to be exempted from religion courses.

Sheila Ayala from Secular Ontario says, “Ontario Catholic school boards and students should be free to march but not on our tax dollar.”

Adam Feibel from the Ottawa Citizen included the SO and HAO members in his report on the rally:

Among other counter-protesters were a dozen or so members of a group called Secular Ontario, objecting to high-school students being sent to the anti-abortion event by publicly funded Catholic school boards. 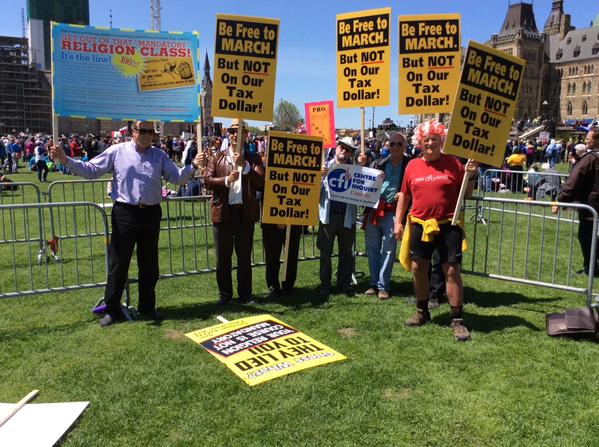 One thought on “Protest and Counter-Protest”