The market is where I find my friends and feel my history and values reinforced; . . . among the people who surround me are agnostics, atheists, crystal-worshippers, lapsed Catholics and members of the United Church of Canada, but few practising Catholics, Jews, Muslims, Hindus or Evangelical Protestants. Those people are at the mall.

On Saturday, I was at the Peterborough Farmers’ Market with a friend and discovered that as Henighan says, it is a great place to meet people and have my  values reinforced. 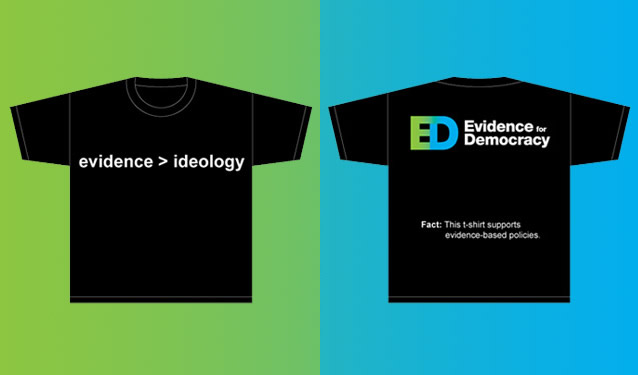 The t-shirt is sold by Evidence for Democracy (E4D)

the leading fact-driven, non-partisan, not-for-profit organization promoting the transparent use of evidence in government decision-making in Canada.

What did I buy? I bought a cup of coffee from the owner of Kyoto Coffee, a jar of Janet’s homemade red pepper jelly, and a pepper plant.