Imagine a society where everyone wore a black ski mask and black robes; you could pretend to be anyone. There would be no need for criminals to worry; no one could identify them as it’s their right to wear a ski mask and not be required to show their face. 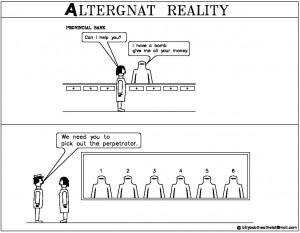 A free society where people are not restricted in their movement requires that its members can be identified. If the members of a society are not required to show their faces, how would the government and legal system be able to function? Wait there could be an upside to this: suppose you lose your driver’s licence for a DUI: just borrow your friend’s licence and you’re back on the road. Your picture is the same as your friend’s, a generic masked individual, so anonymity has its advantages!

Is this a realistic concern? Only a small portion of the population wants this right. If one member of a society has the right to wear a mask, then in a democratic society that is subject to a bill of rights all people in the society have that right. Church of the Holy Hockey Mask anyone. Hockey is a religion, correct?

5 thoughts on “Why We Need to See Your Face”