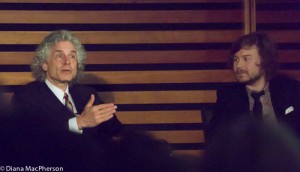 Last night Steven Pinker, the Johnstone Family Professor of Psychology at Harvard University, Chair of the Usage Panel of the American Heritage Dictionary and author of many award winning books, including: The Language Instinct, How the Mind Works, The Blank Slate, and The Better Angels of Our Nature, was the guest of honour at the Toronto Reference Library (TPL), Bram & Bluma Appel Salon where he discussed the topic of his latest book, The Sense of Style: The Thinking Person’s Guide to Writing in the 21st Century. Steven Pinker opened with reading an excerpt from his book, then sat down for an interview with Mark Medley, The Globe and Mail’s Book’s Editor; the evening concluded with Steven Pinker answering audience questions.

Mark Medley was an excellent interviewer and his questions allowed Steven Pinker to speak about many writing topics. The following are most memorable for me (although many more were discussed):

The audience also had great questions. One audience member challenged Steven Pinker’s criticism of academic writing’s use of obscure jargon-filled language; she suggested that these writers convey complex ideas to an academic audience in their own field and therefore we cannot expect them to make us, as outsiders, understand such subjects. Steven Pinker’s response was that he is often baffled by articles in his own field and that avoiding jargon, for example replacing the technical, murine model with the familiar, rats and mice, can increase one’s readership by multitudes at the cost of a few characters. He also dismissed the idea that academics (or anyone else) should write for only their own profession (for example, biologists writing only for biologists and psychologists only for psychologists) because academic silos exist for the convenience of deans of universities (I personally loved this part because I have strong opinions about academic silos) so why limit your readership?

The final question came from a younger audience member who asked Steven about using online abbreviations. Steven pointed out that using such shortcuts were appropriate to the medium of texting and that no one, despite the urban legend, uses that type of writing in university papers. I was pleased that Steven dispelled this urban myth and explained that the whole thing started with a 12 year old Scottish girl who, ten years ago, decided to see if she could write a paper using only online abbreviations (Steven thought this was brilliant and so do I!); the story spread and soon it morphed into a story about a student handing in a paper written this way (not as an experiment) and finally as the general belief that university students write papers filled with online abbreviations.

Overall, it was a very enjoyable evening. Steven Pinker is an engaging speaker and as I said earlier, Mark Medley is an excellent interviewer. I left out a lot of what was discussed during the 2 hour event but it was recorded and will be available to view on the Appel Salon site.

2 thoughts on “An Evening with Steven Pinker at the Toronto Reference Library (TPL), Bram and Bluma Appel Salon”