So last year I wrote about Freedom of Thought 2013, the report by the International Humanist and Ethical Union (IHEU) about state discrimination against and persecution of atheists, humanists, and the non-religious. I promised a more in-depth look at the data, but then, you know, site problems and all, so I never got around to it. Here are some glimpses of what I’d gotten done.

The report looks at the governmental, legal, and judicial status of nonbelief and nonbelievers in just about every country in the world. The focus is on “official”, state-sanctioned discrimination against nonbelievers, rather than on the attitudes of the general public.

The categories are set up as follows:

The methodology was simple: for each country they started with the assumption that it was “Free and Equal”, then checked the country’s laws and recent history for evidence to the contrary. As worse examples of discrimination or intolerance were observed, the country’s category standing decreased. If no examples were found, then the country would be “Free and Equal” by default.

Of course, ideally we want all countries to be “Free and Equal” with respect to nonbelievers, but let’s be realistic… ain’t happening. If we can’t have perfect equality, it would be “good enough” to just not be actively discriminated against by the law or government. So “Free and Equal” is the ideal, but “Mostly Satisfactory” would also be tolerable.

Unfortunately, this is the world we live in:

There are some big chunks of “Mostly Satisfactory” yellow – the US, Brazil, France, Norway, Ukraine, Burkina Faso and Côte d’Ivoire, Mozambique, and Mongolia – but not that much. There is almost no “Free and Equal” green – the only ones you can really see are Japan and South Korea, Uruguay, and Niger.

Once again, I have to stress that the focus was on official and legal discrimination against nonbelievers… not on cultural attitudes, no matter how intense, deeply entrenched, or widespread, and irrespective of any discrimination against religious groups. When these results originally came out, Canadians were surprised and dismayed by the fact that Canada scored worse than the US; this focus is the reason why. The US may be particularly culturally hostile to nonbelief, but its laws are actually very secular – far more secular than Canada’s ever were. Several other countries that are extremely culturally friendly to nonbelief scored poorly because of state churches or blasphemy laws that, while they are not enforced, remain needlessly on the books. On the flip side, some countries actually scored much better than they should, by all rights, because of this focus. Niger managed to score “Free and Equal” despite being on the World Watch List for religious discrimination, because the discrimination there generally specifically targets Christians, not nonbelievers – likely because there simply isn’t a large enough nonbeliever population to warrant any official or systemic discrimination (yet).

Niger (along with São Tomé and Príncipe, Sierra Leone, Benin, and others) is a good example to show how forgiving the report’s methodology actually is: to be a “Free and Equal” society, all you have to do is simply not discriminate or persecute nonbelievers specifically. (You can still discriminate against or persecute other religions, or for other reasons like race or for being LGBT.) That’s literally all you’d have to do (or not do); the report is generously forgiving in this way. It should be easy to be “Free and Equal” by this standard, yet less than 8% of the world is. Even if you allow “Mostly Satisfactory” as “good enough”, that still only covers a total of ~17% of the world. 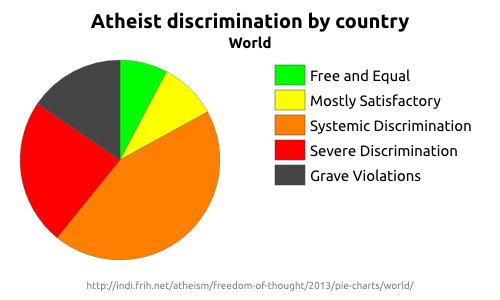 That’s pretty pathetic, really. Even with the report’s rather optimistic methodology, it concludes that more than 80% of the world has explicitly chosen to actively discriminate against or – in almost 40% of the world – outright persecute nonbelievers.

3 thoughts on “This is not an unbelievers’ world”