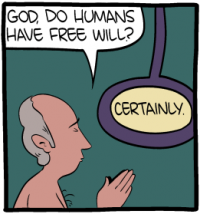 “In fact, I just decided that you would freely will to ask me that very question.”