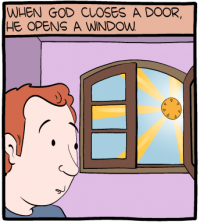 This is also the story of how I became an atheist. “No thanks, God,” I said, booting up Linux. “I don’t use Windows.”