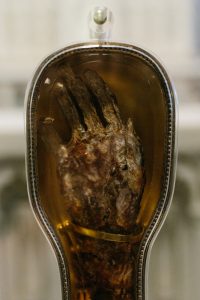 I really haven’t got the heart to point out to Catholics that this was probably his masturbatin’ hand.