You still have time to gift this new eBook to your loved ones (or yourself!) and, at under 10 bucks, it’s really a steal considering the amount of research that went into it. Post Secular: Science, Humanism and the Future of Faith, the debut book by Canadian author Marc Schaus gives you a whirlwind tour of the current science supporting the hypothesis that the world is indeed hurtling towards a secular future.

“I take the term postsecular to imply a time in which we do not even need to invoke the term secular so much or even at all. A time in which we are not committing so much time to debates with a secular/religious divide and the debates are, well, just debates about largely secular topics. In short, I envisage the separation of religious values from state values to finally be a non-issue.” (pg. 129)

Post Secular is published by Canadian Humanist Publications, where it can also be purchased (also available on Amazon.ca). Packed with information, the book contains 10 chapters dedicated to the latest research spanning subjects and arguments ranging from social science to neuroscience and everything in between. 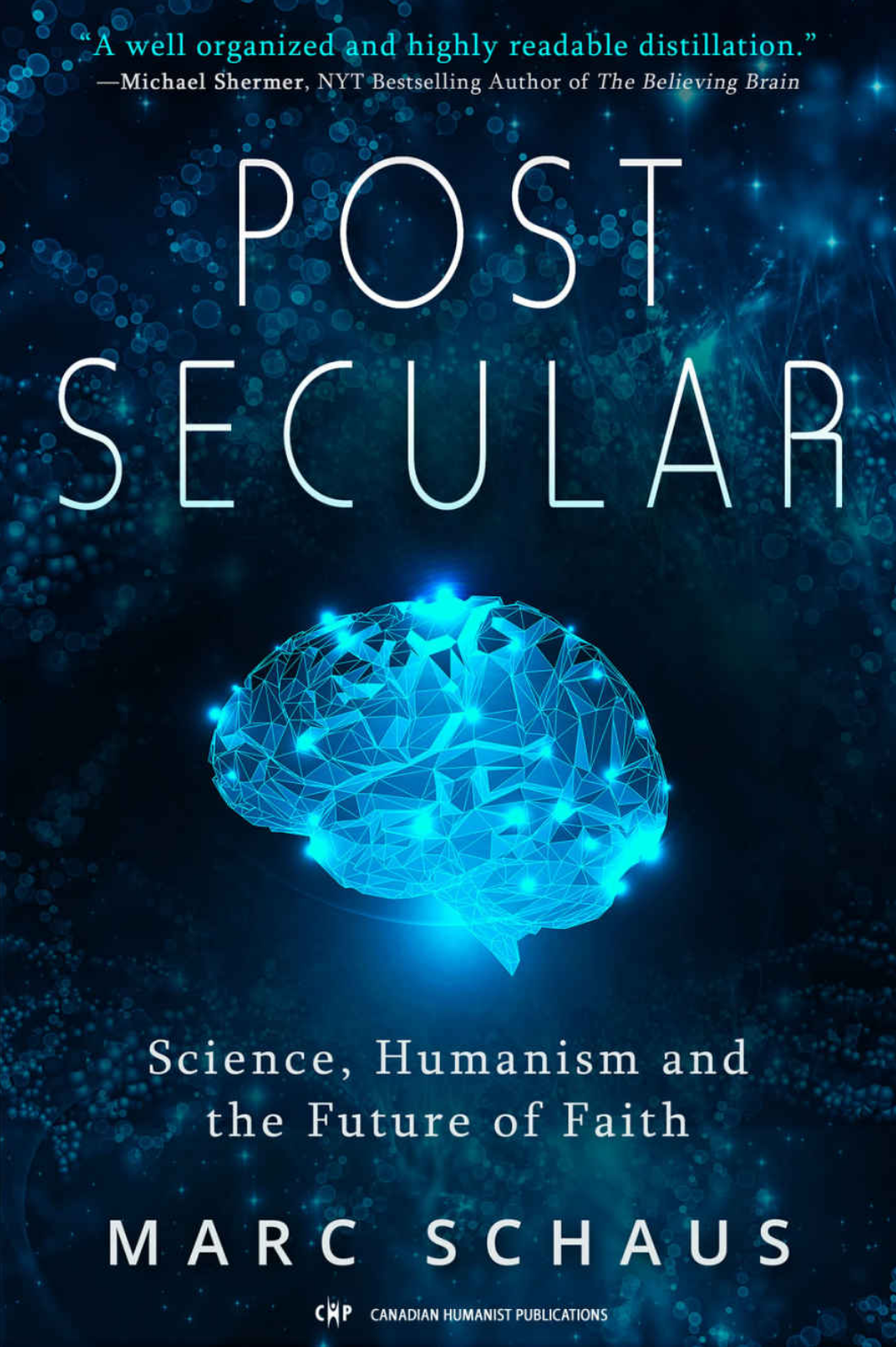 Governments, laws and current trends over the world are shown to be pointing in a good direction, despite the horror shows played out in the media and Schaus also covers correlations (and correlational fallacies) between level of secularism vs education, economic status, the internet, safety and other factors.

Similarities between, and root narratives of, different religions are explored and I picked up several historical facts I’d not known before.

The chapter on the “Biology of Mythology” describes the different adaptations of our evolutionary history such as those originally used for different purposes, changes in social structures, and how neuroscience is bringing to light more of the nuts and bolts of our decision making processes. Why do we seem fearful of certain things at specific stages of human development? What are the origins of our obsessions with “purity”?

“…atheism really constitutes a self-imposed deficiency in how the brain is designed to operate. It is a deviation from the cognitive optimum crafted over millennia for the human animal.” (pg. 207)

Another area the book covers are precursors to spirituality and human-like observances (“funerals”, monogamy, etc.) found in non-human animals. Would have been great to see this expanded even further – there was research not mentioned that I was aware of from other books and articles, such as a seeming respectful observance for the dead in gorillas, and similar group behaviours from chimps, elephants, dolphins and others.

Chapters 8 and 9 serve as a catalogue of sorts on what the future may hold in terms of replacement of religious narratives with secular ones. We have to discard the notions of objective “good” and “evil” and recognize that science can be used to shape our idea of morality – that “moral” behaviours have their roots in the evolutionary chain just like everything else. We much more often hear about the simple precursor body parts and functions when destroying arguments against evolution; this book, however, also covers the precursors of morality in the animal kingdom; areas of research that, as Schaus points out, go under-reported in the media.

“Redefining moral behaviors as prosocial gets us one step closer toward being able to conceptualize how they could have evolved over time in other social species in smaller, simpler increments.” (pg. 244)

“Many theists who believe that religion is necessary for morality clearly have not envisioned how our populations of humans behaved morally prior to the invention of their particular faith.” (pg. 248)

In terms of constructive criticism, I personally found the style a little too conversational and maybe it was just me, but I found it hard to see coherence in the first couple chapters; i.e. lots of nice interesting bits, but I couldn’t clearly see the structure of how they were presented. The attempt to create a new keyword, ‘demolitions’, to describe types of arguments that have the most effect on mind-changing felt a bit forced and unnecessary (and appeared to be forgotten in the later chapters.) I also hate the misuse of the term “militant” when applied to atheists; in every other context it means something completely different and is just asking to be abused and misquoted (okay, that’s a personal hangup of mine, not really a serious criticism of the book. Another one is using American spellings in Canadian books…)

Being a Canadian publication and because the thesis purports to be in reference to the whole earth, I must admit I was a little bit disappointed with how the author skimmed or cut entirely the sections covering non-Abrahamic religions in the fourth and fifth chapters. I think the current climate in India, for example, would have been really interesting to compare and contrast to, given how they too are contending with (what appears to be) rising fundamentalist (Hindu) religion.

That said, there are chapters in there for everyone. You can easily skip the sections covering scientific topics with which you are already knowledgeable. The ones I enjoyed most covered neurology, the growing area of epigenetic research (a topic I’ve found useful in debates over the impact of racism and abusive conditions on children of parents upon whom they were perpetrated,) precursors to complex and moral behaviours as seen in animals today, and the sections on building the new narratives that will replace those of the religious orders (aweism, for example.) The ‘soul’ is one of those concepts that will be particularly difficult to wipe out for instance – especially when discoveries in quantum mechanics and other too-difficult-to-generally-understand subjects lend themselves so easily to abuse by the likes of Deepak Chopra.

Post Secular concludes with a series of predictions for what society (western and non-western) might look like 100 years in the future. Spoiler: it’s looking pretty good.

“The baseline values, such that life is positive and suffering is negative, become established when we see that such a valuation is innate, universal and cross-species.” (pg. 269)

The book is a great resource and has essentially provided me with a stellar reading list to branch out into any of the topics covered. Support a Canadian author and download this one today.