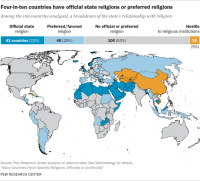 Graphic from the Pew Research Center report on state religions.