One of the most pervasive myths about Muslims is that they’re either at least mildly supportive of Islamic extremism, or ambivalent to it. The truth is exactly the opposite.

A new report by Pew Research Center titled “Like most Americans, U.S. Muslims concerned about extremism in the name of Islam” debunks the myth handily. The title actually understates the results. 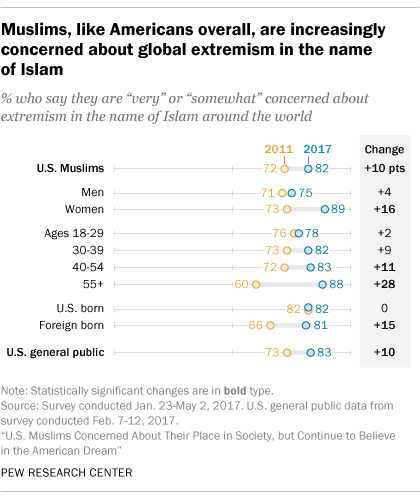 Male Muslims seem to be the least concerned about Islamic extremism, followed by young Muslims, and both groups have been little moved by the events of the last 6 years. All others are either essentially the same as the general American public (although the margins of error are quite high for some of these demographics – as high as 13.9% 19 times out of 20 for the 30–39 year-old Muslim group). A couple of groups – women and elderly Muslims – are more concerned than most Americans.

But that’s not all.

Another report using the same survey data was released a couple of weeks ago. This report, “U.S. Muslims Concerned About Their Place in Society, but Continue to Believe in the American Dream”, went into great detail about American Muslims’ opinions and attitudes. Most of it is of little interest to Canadians, because it’s largely about Trump and the attitudes of their fellow Americans. But there were a couple of items of interest.

It turns out that – in complete defiance of the claims made by most islamophobic bigots – Muslims are less likely to support violent extremism than the bigots themselves! 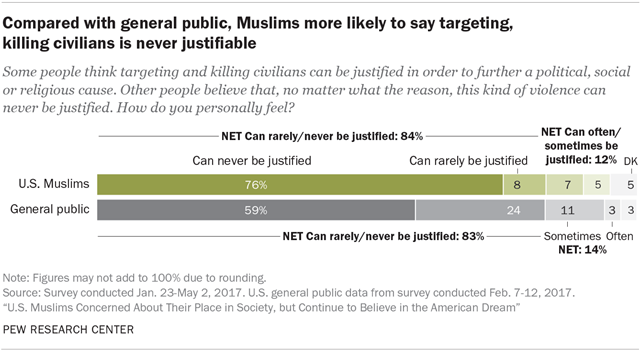 None of this should really come as a surprise to anyone who hasn’t had their head up their ass the last year or so. There is extensive and growing evidence that the real threat to Canadian society is not Muslims, but rather right-wing extremism. And if there was any doubt of that remaining, I think the recent events in Charlottetown have put them to rest.