Just this week, the Angus Reid Institute released an interesting survey about Canadian attitudes toward the European refugee/migrant crisis. Most of the results really weren’t all that surprising. Canadians support intervention to help the refugees by a slim margin (54%), though that support comes mostly from voters leaning Liberal and NDP – 63% of Conservative supporters show a complete lack of empathy. There was, however, one interesting surprise in the data.

Canada has a very complicated history of accepting refugees, but one that is, on the whole, pretty positive. Older Canadians might remember the “Vietnamese boat people” crisis – people fleeing the Vietnam War and its aftermath (and not just Vietnamese, some were fleeing Khmer Rouge in Cambodia, and Laos). The current crisis is an almost perfect echo of that. Then, as now, Western countries were slow to respond. At first they simply turned away refugees and sent them back, usually to die in labour camps. Uncounted thousands died at sea, or were murdered by pirates. Then, as now, the Canadian government at first responded with an overwhelming “meh”.

But that changed when a powerful grassroots movement forced Pierre Trudeau to take action, and Canada ended up taking over 200,000 new immigrants. The result is now considered a landmark historical humanitarian triumph, and a source of Canadian national pride. Unsurprisingly, people are already urging for a repeat of that history (part 1 of that story segment). (And the deaths of Alan and Ghalib Kurdi may be the tragedy needed to force action.)

Canadians’ responses to the current crisis fall quite predictably in line with their preferred party: 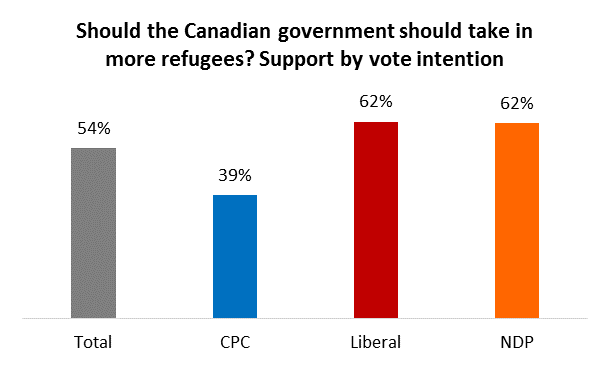 No surprises there. Harper’s message on the situation has been that the refugees are probably harbouring terrorists, and even for the legitimate refugees fleeing war and destruction, we can fix that problem by bombing their home countries more. It’s only natural that his supporters would echo the sentiment.

There was a rather depressing finding that it is mostly older Canadians who are following the story – younger Canadians don’t seem to care all that much. But that’s not the finding I found most interesting. 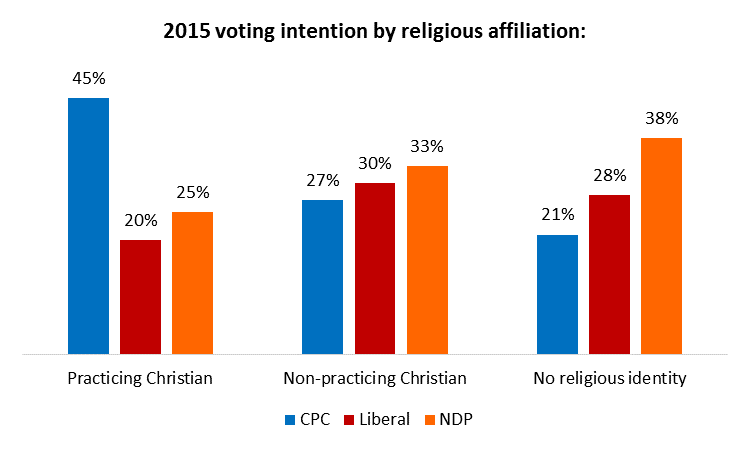 But here’s where it gets interesting. ARI pulled out all the Conservative supporters, asked them some key questions, and then charted them according to their religious affiliation. Here is the somewhat surprising result: 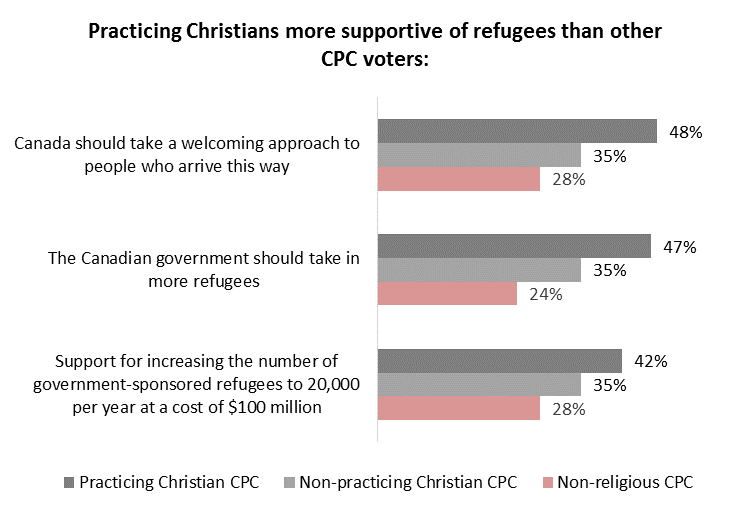 That’s right: Among Conservative Party supporters, the more Christian you are, the more humane and empathetic your position is with respect to the crisis. Another option not in the chart above was “Canada should do nothing”. 25% of practising Christians agreed with that… and 37% of “nones” (and 30% of “non-practising Christians”).

In other words, at least among Conservative Party supporters, the “nones” are the assholes. The people that actually care are the Christians. My head spins.

The reason why this is so shocking is that usually when these types of surveys are done, it’s pretty much a rote result that higher religiosity correlates to decreased empathy for others. We’ve all seen tons of studies that show that the non-religious just care more about other people, and are more willing to acknowledge and respect their individuality, humanity, and dignity. I would have bet big money that the results of this survey would have been the exact opposite: that any empathy for the refugees that exists within the Conservative fan base would come from the “nones”. Colour me surprised.

The key difference may be that this is a rare instance where – unlike LGBTQ issues, or women’s issues – the religion itself has nothing specific to say on the topic. It’s more or less up to individuals to decide what action they think Canada should take.

The result raises several intriguing questions. The standard narrative among nonbelievers is that giving up religion tends to make you more attuned to and interested in “worldly matters”, including your fellow humans, which thus tends to make you more empathetic and more progressive: atheism → empathy → progressivism. But what if that’s all wrong? What if the reality is that empathy doesn’t come from being atheist at all? What if the idea that atheism tends to lead to humanism is entirely specious?

In fact, what if it’s the other way around entirely? What if being empathetic and inclined to humanism leads you to recognized the evils wrought by religion, and that is what creates atheists? That would have unnerving implications. Atheists prefer to identify the source of their atheism as reason, not emotion. On the other hand, it would explain why atheists who came by their atheism by other means – not via humanism – could seem like a different species altogether. It could explain why there are such deep divides between the “empathy atheists” – those that came by and associate their atheism with humanism and empathy, and thus consider social justice the paramount issue – and the “academic atheists” – those that came by and associate their atheism with purely logical processes, and thus who consider advancing and protecting science (and debunking pseudoscience) as the paramount.

Obviously we can’t draw any conclusions from a single result in a single non-peer-reviewed survey that was only tangential to the main aim of the survey. Clearly more study is needed before we can take any of these speculations seriously. But that doesn’t mean we can’t let these results give us pause, or that we can’t consider their implications.

At the very least, they seem to suggest this much: When someone identifies as a “Conservative Christian”, the most worrisome part of that might not actually be the “Christian” part.

7 thoughts on “Which is worse, being Christian or being Conservative?”