There is no doubt that the Supreme Court ruling against opening government meetings with prayer is big deal for secularism in Canada. But how do Canadians at large feel about it?

On Monday, the Angus Reid Institute released the results of an opinion poll titled Prayer in Canadian Public Life: a Nation Divided. They surveyed 1,500 Canadians, and asked them a battery of questions relating to the Mouvement laïque québécois v Saguenay ruling, and secularism in Canada in general.

(Warning: I’m writing this review based on a draft of the report. Take everything with a grain of salt.)

I would have expected to see a majority in support of prayers in government meetings. I was pleasantly surprised to discover that the majority (56%) supports the ruling: 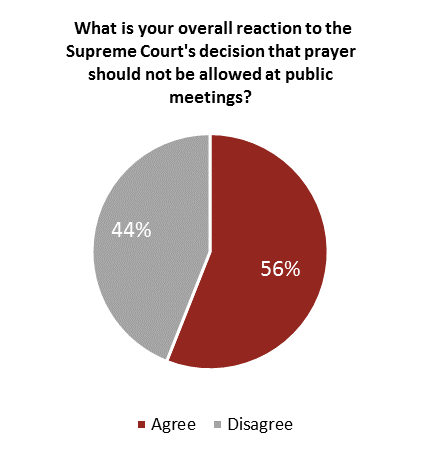 Even more interesting is that this is the result now. You see, normally people tend to prefer the status quo – whatever that happens to be. When sweeping social changes happen, it’s common that support for the change grows over time as people get accustomed to the new status quo. So whatever the level of support happens to be today, we can expect it to grow. I would have expected religious Canadians to be fairly defensive about having their prayer taken away, then gradually, over time they would accept the new status quo – and eventually come to love it. The fact that there is already general support for the change is heartening.

Amusingly, though, it doesn’t seem like this support for ditching the prayer is due to a deep-seated Canadian respect for secularism: 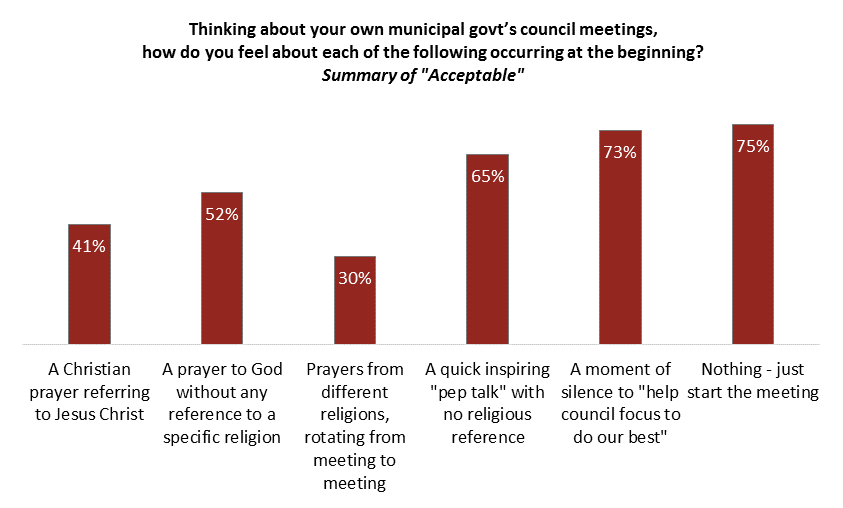 It seems like the real reason Canadians are fine with ditching the prayer is just because they want their elected officials to hurry the fuck up and get down to business.

Here’s what I mean; for each of the alternatives listed above applied to their own council meetings, here is how it broke down (with some colour coding to help visualization, green meaning higher support, red meaning lower):

You can see that any kind of sectarian prayer – especially rotating ones – is hotly rejected, but “non-denominational” are somewhat acceptable. Of the three non-religious options, a “pep talk” and a moment of silence were both fairly acceptable. But the most support, by far, went to “just start the damn meeting” option.

It probably won’t come as a surprise that there’s a generation gap on the issue, but you might be surprised to see how extreme it is:

Baby boomers and those before are the only groups that disagrees with the ruling. All the younger cohorts agree with it, with pretty much no difference between Gen X and the Millenials.

The survey did come with some bad news, though. It seems that most Canadians don’t think increasing secularization is a sign of progress: 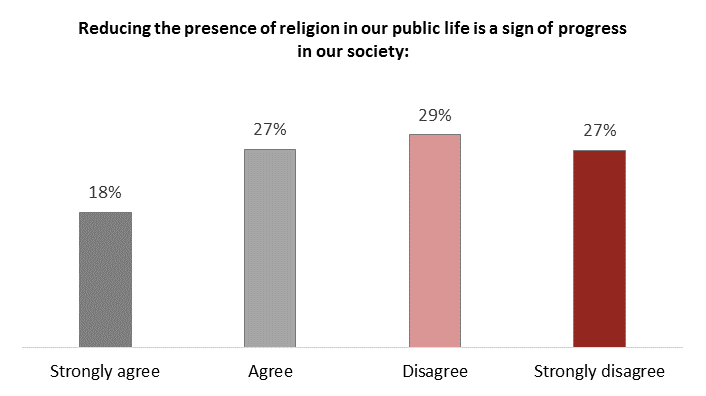 I hold out hope that those results are just due to confusion over the term “public life”. It’s possible, even probable, that the majority of respondents didn’t understand that the question meant reducing the presence of religion in government, and misinterpreted it to mean in society at large. Even I would disagree with the claim that the disappearance of religion from society is a sign of progress – it could just as easily be due to a terrible regression to an intolerant dictatorship that just happens to be atheist (which actually happened in a number of countries). It was a terribly worded question, really.

God in the Anthem

There was one other bit of not-so-great news in the survey. In addition to the questions about MLQ v Saguenay, the survey also asked some questions about whether mentions of God should be removed from the National Anthem (in English and French versions).

Here is how ARI represented the results: 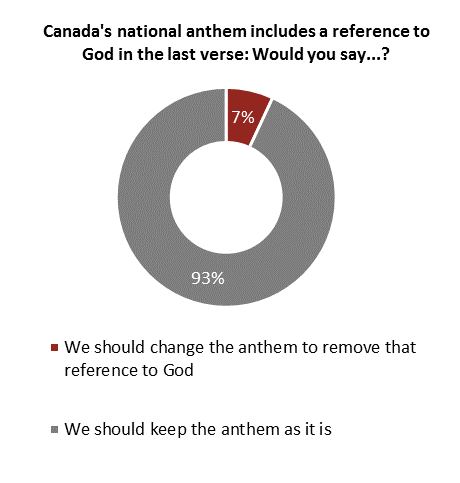 That’s pretty depressing, but it’s not telling the whole story. Here is how I would represent the results: 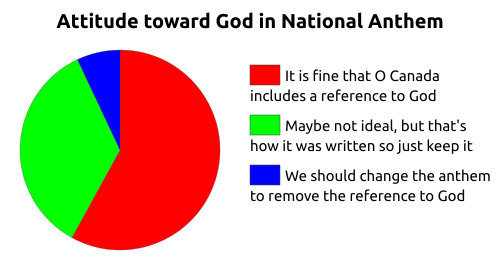 Now, the majority still have no problem with God in the Anthem. But what was hidden in the previous chart is that a substantial part of those who don’t want to change the Anthem recognize there’s a problem with it. That’s pretty important.

Remember what I said above about how people usually prefer the status quo? People usually object to change – especially change in cherished symbols or institutions – even when that change is for the better. But if it really is a good change, and someone comes along and makes that change, then after a while everyone starts to get on board with it. One of the most graphic examples of that in recent history is for same-sex marriage. The first time a court ruled that same-sex marriage had to happen in 2003, there was only middling support for the idea, and lots of “if it ain’t broke, don’t fix it” logic being tossed around. Five years later, ⅔ of the country was so adamant that the issue was settled that the newly elected Harper was embarrassed to follow through on a campaign promise to reopen it (and ultimately, didn’t).

So I don’t think that ARI was fairly representing the real state of Canadian opinion on the issue in that chart. Yes, support for fixing the Anthem is still in the minority… but rather than “7% say we should change it and 93% say we shouldn’t”, the real story the data is telling is “42% recognize there’s a problem and 58% either don’t or don’t care”. Of those 42% that recognize a problem, 5 in 6 don’t think it should be fixed… but that’s just the usual social inertia you’d expect – people would just rather not change anything, most of the time. But most of those are people who, if the change was actually made, would probably go along with it, and in a few years be just as insistent that it should be left alone as it is at that point.

We still have work to do, obviously. But saying that we have 42% of Canada agreeing that there is a problem is a vastly different matter than saying 93% disagree with us. We still need to get that 42% to grow to a majority, yes, but the real problem here is apathy. 42% recognize a problem; only 7% care. In fact, with another question, the ARI survey found that 85% of Canada thinks that the issue is – and I quote – “a case of political correctness gone too far”.

Well, I’m sure that’s what they would have said about prayer in city meetings before the MLQ v Saguenay ruling.

So don’t be disheartened. We still have work to do to convince Canadians to get God out of the Anthem, but not as much as ARI‘s spin would have you believe. Our greatest enemies are apathy and resistance to change, but if and when change happens, those vanish immediately, so don’t let them worry you too much.

5 thoughts on “How do Canadians feel about removing prayer from government meetings, and God from the anthem?”